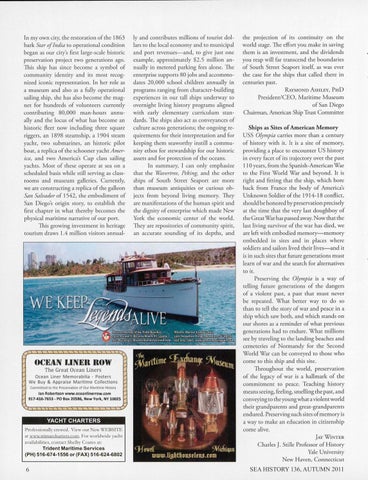 In my own city, the restoration of the 1863 bark Star ofIndia to operational condition began as our city&#39;s first large-scale historic preservation project rwo generations ago. This ship has since become a symbol of community identity and its most recognized iconic representation. In her role as a museum and also as a fully operational sailing ship, she has also become the magnet for hundreds of volunteers currently contributing 80,000 man-hours annually and the locus of what has become an historic fleer now including three square riggers, an 1898 steamship, a 1904 steam yacht, rwo submarines, an historic pilot boat, a replica of the schooner yacht America, and rwo America&#39;s Cup class sailing yachts. Most of these operate at sea on a scheduled basis while still serving as classrooms and museum galleries. Currently, we are constructing a replica of the galleon San Salvador of 1542, the embodiment of San Diego&#39;s origin story, to establish the first chapter in what thereby becomes the physical maritime narrative of our port. This growing investment in heritage tourism draws 1.4 million visitors annual-

ly and contributes millions of tourist dollars to the local economy and to municipal and port revenues-and, to give just one example, approximately $2.5 million annually in metered parking fees alone. The enterprise supports 80 jobs and accommodates 20,000 school children annually in programs ranging from character-building experiences in our tall ships underway to overnight living history programs aligned with early elementary curriculum standards. The ships also act as conveyances of culture across generations; the ongoing requirements for their interpretation and for keeping them seaworthy instill a community ethos for stewardship for our historic assets and for protection of the oceans. In summary, I can only emphasize that the ~vertree, Peking, and the other ships of South Street Seaport are more than museum antiquities or curious objects from beyond living memory. They are manifestations of the human spirit and the dignity of enterprise which made New York the economic center of the world. They are repositories of community spirit, an accurate sounding of its depths, and

the projection of its continuity on the world stage. The effort you make in saving them is an investment, and the dividends you reap will far transcend the boundaries of South Street Seaport itself, as was ever the case for the ships that called there in centuries past. RAYMOND ASHLEY, PHD President/CEO, Maritime Museum of San Diego Chairman, American Ship Trust Committee

Ships as Sites of American Memory USS Olympia carries more than a century of history with it. Ir is a site of memory, providing a place to encounter US history in every facet of its trajectory over the past 110 years, from the Spanish-American War to the First World War and beyond. It is right and firring that the ship, which bore back from France the body of America&#39;s Unknown Soldier of the 1914-18 conflict, should be honored by preservation precisely at the time that the very last doughboy of the Great War has passed away. Now that the last living survivor of the war has died, we are left with embodied memory-memory embedded in sites and in places where soldiers and sailors lived their lives-and it is in such sires that future generations must learn of war and the search for alternatives to it. Preserving the Olympia is a way of telling future generations of the dangers of a violent past, a past that must never be repeated. What better way to do so than to tell the story of war and peace in a ship which saw both, and which stands on our shores as a reminder of what previous generations had to endure. What millions see by traveling to the landing beaches and cemeteries of Normandy for the Second World War can be conveyed to those who come to this ship and this site. Throughout the world, preservation of the legacy of war is a hallmark of the commitment to peace. Teaching history means seeing, feeling, smelling the past, and conveying to the young what a violent world their grandparents and great-grandparents endured. Preserving such sites of memory is a way to make an education in citizenship come alive. ]AYWINTER Charles J. Stille Professor of History Yale University New Haven, Connecticut