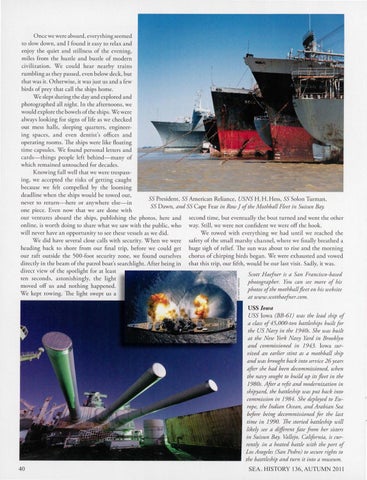 Once we were aboard, everything seemed to slow down, and I found it easy to relax and enjoy the quiet and stillness of the evening, miles from the hustle and bustle of modern civilization. We could hear nearby trains rumbling as they passed, even below deck, but that was it. Otherwise, it was just us and a few birds of prey that call the ships home. We slept during the day and explored and photographed all night. In the afternoons, we would explore the bowels of the ships. We were always looking for signs of life as we checked our mess halls, sleeping quarters, engineering spaces, and even dentist&#39;s offices and operating rooms. The ships were like floating time capsules. We found personal letters and cards-things people left behind-many of which remained untouched for decades. Knowing full well that we were trespassing, we accepted the risks of getting caught because we felt compelled by the looming deadline when the ships would be towed out, SS President, SS American Reliance, USNS H. H. Hess, SS Solon Turman, never to return-here or anywhere else-in SS Dawn, and SS Cape Fear in Row J of the Mothball Fleet in Suisun Bay. one piece. Even now that we are done with our ventures aboard the ships, publishing the photos, here and second time, but eventually the boat turned and went the other online, is worth doing to share what we saw with the public, who way. Still, we were not confident we were off the hook. We rowed with everything we had until we reached the will never have an opportunity to see these vessels as we did. We did have several close calls with security. When we were safety of the small marshy channel, where we finally breathed a heading back to shore from our final trip, before we could get huge sigh of relief. The sun was about to rise and the morning our raft outside the 500-foot security zone, we found ourselves chorus of chirping birds began. We were exhausted and vowed directly in the beam of the patrol boat&#39;s searchlight. After being in that this trip, our fifth, would be our last visit. Sadly, it was. direct view of the spotlight for at least Scott Haefner is a San Francisco-based ten seconds, astonishingly, the light photographer. You can see more of his moved off us and nothing happened. photos ofthe mothballfleet on his website We kept rowing. The light swept us a at www.scotthaefner.com.

USS Iowa USS Iowa (BB-61) was the lead ship of a class of 45, 000-ton battleships built for the US Navy in the 1940s. She was built at the New York Navy Yard in Brooklyn and commissioned in 1943. Iowa survived an earlier stint as a mothball ship and was brought back into service 26years after she had been decommissioned, when the navy sought to build up its fleet in the 1980s. After a refit and modernization in shipyard, the battleship was put back into commission in 1984. She deployed to Europe, the Indian Ocean, and Arabian Sea before being decommissioned for the last time in 1990. The storied battleship will likely see a different fate ftom her sisters in Suisun Bay. Vallejo, California, is currently .in a heated battle with the port of Los Amgeles (San Pedro) to secure rights to the batttleship and turn it into a museum.