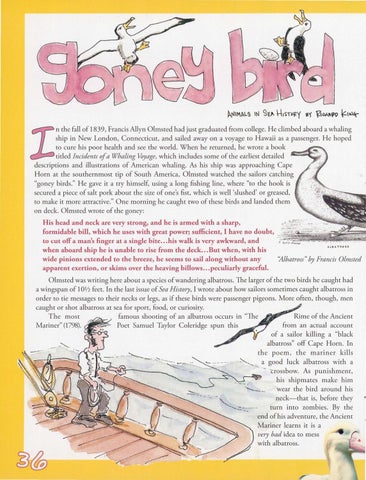 n the fall of 1839, Francis Allyn Olmsted had just graduated from college. He climbed aboard a whaling ship in New London, Connecticut, and sailed away on a voyage to Hawaii as a passenger. He hoped to cure his poor health and see the world. When he returned, he wrote a book _ , tided Incidents ofa Whaling Voyage, which includes some of the earliest detailed ~ ·· . descriptions and illustrations of American whaling. As his ship was approaching Cape Horn at the southernmost tip of South America, Olmsted watched the sailors catching &quot;goney birds.&quot; He gave it a try himself, using a long fishing line, where &quot;to the hook is secured a piece of salt pork about the size of one&#39;s fist, which is well &#39;slushed&#39; or greased, to make it more attractive.&quot; One morning he caught two of these birds and landed them on deck. Olmsted wrote of the goney:

His head and neck are very strong, and he is armed with a sharp, formidable bill, which he uses with great power; sufficient, I have no doubt, to cut off a man&#39;s finger at a single bite ... his walk is very awkward, and when aboard ship he is unable to rise from the deck ... But when, with his wide pinions extended to the breeze, he seems to sail along without any &quot;Albatross&quot; by Francis Olmsted apparent exertion, or skims over the heaving billows ... peculiarly graceful. A L6 A T l\ OS S

Olmsted was writing here about a species of wandering albatross. The larger of the two birds he caught had a wingspan of 1OY2 feet. In the last issue of Sea History, I wrote about how sailors sometimes caught albatross in order to tie messages to their necks or legs, as if these birds were passenger pigeons. More often, though, men caught or shot .albatross at sea for sport, food, or curiosity. The most famous shooting of an albatross occurs in &quot;The Poet Samuel Taylor Coleridge spun this . from an actual account Mariner&quot; (1798). q of a sailor killing a &quot;black &quot;--.. &#39; albatross&quot; off Cape Horn. In