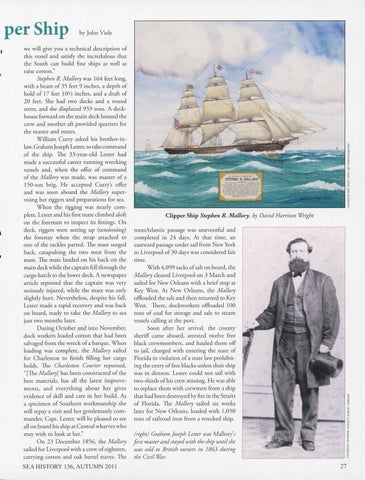 we will give yo u a technical description of this vessel and satisfy the incredulous that the South can build fine ships as well as raise cotton.&quot; Stephen R. Mallory was 164 feet long, with a beam of 35 feet 9 inches, a depth of hold of 17 feet 1OY2 inches, and a draft of 20 feet. She had rwo decks and a round stern, and she displaced 959 tons. A deckhouse forward on the main deck housed the crew and another aft provided quarrers for the master and mares. William C urry asked his brorher-inlaw, Graham Joseph Lester, to rake command of the ship. The 33-year-old Lester had made a successful career running wrecking vessels and, when the offer of command of the Mallory was made, was master of a 150-ron brig. He accepted C urry&#39;s offer and was soon aboard the Mallory supervising her riggers and preparations for sea. When the rigging was nearly complete, Lester and his first mate climbed aloft on the foremast to inspect its fittings . On deck, riggers were setting up (tensioning) the forestay when the strap attached to one of the tackles parted. The mast surged back, catap ulting the rwo men from the mast. The mate landed on his back on the main deck while the captain fell through the cargo hatch to the lower deck. A newspaper article reported that the captain was very seriously injured, while the mate was only slightly hurt. Nevertheless, despite his fall , Lester made a rapid recovery and was back on board, ready to rake the Mallory to sea just rwo months later. During October and into November, dock workers loaded cotton that had been salvaged from the wreck of a barque. When loading was complete, the Mallory sailed for Charleston to finish filling her cargo holds. The Charleston Courier reported, &quot;[The Mallory] has been constructed of the best materials, has all the latest improvements, and everything about h er gives evidence of skill and care in her build. As a specimen of Southern workmanship she will repay a visit and her gentlemanly commander, Capt. Lester, will be pleased to see all on board his ship at Central wharves who may wish to look at her.&quot; On 23 December 1856, the Mallory sailed for Liverpool with a crew of eighteen, carrying cotton and oak barrel staves. The

Clipper Ship Stephen R. Mallory, by David Harrison Wright rransAdanric passage was uneventful and completed in 24 days. At that time, an easrward passage under sail from New York to Liverpool of 30 days was considered fair time. With 4,099 sacks of salt on board, the Mallory cleared Liverpool on 3 March and sailed for New Orleans with a brief stop at Key West. Ar New Orleans, the Mallory offioaded the salt and then returned to Key West. There, dockworkers offioaded 100 tons of coal for storage and sale to steam vessels calling at the port. Soon after her arrival, the coun ty sheriff came aboard, arrested rwelve free black crewmembers, and hauled them off to jail, charged with entering the state of Florida in violatio n of a state law prohibiting the entry of free blacks unless their ship was in distress. Lester could not sail with rwo-rhirds of his crew missing. H e was able to replace them with crewmen from a ship that had been destroyed by fire in the Straits of Florida. The Mallory sailed six weeks later for New Orleans, loaded with 1,050 tons of railroad iron from a wrecked ship.

(right) Graham Joseph Lester was Mallory&#39;s first master and stayed with the ship until she was sold to British owners in 1863 during the Civil~r. 27