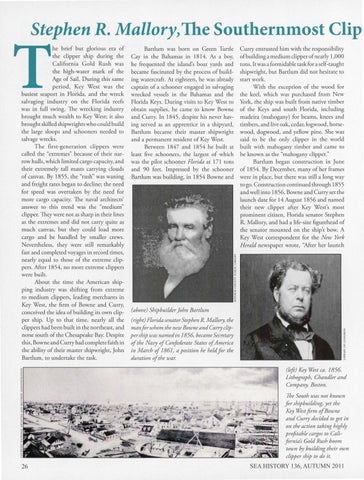 Stephen R. Mallory, The Southerntnost Clip he brief but glorious era of the clipper ship during the California Gold Rush was the high-water mark of the Age of Sail. During this same period, Key West was the busiest seaport in Florida, and the wreck salvaging industry on the Florida reefs was in full swing. The wrecking industry brought much wealth to Key West; it also brought skilled shipwrights who could build the large sloops and schooners needed to salvage wrecks. The first-generation clippers were called the &quot;extremes&quot; because of their narrow hulls, which limited cargo capacity, and their extremely tall masts carrying clouds of canvas. By 1855, the &quot;rush&quot; was waning and freight rates began to decline; the need for speed was overtaken by the need for more cargo capacity. The naval architects&#39; answer to this trend was the &quot;medium&quot; clipper. They were nor as sharp in their lines as the extremes and did not carry quire as much canvas, bur they could load more cargo and be handled by smaller crews. Nevertheless, they were still remarkably fast and completed voyages in record times, nearly equal to those of the extreme clippers. After 1854, no more extreme clippers were built. About the time the American shipping industry was shifting from extreme to medium clippers, leading merchants in Key West, the firm of Bowne and Curry, conceived the idea of building its own clipper ship. Up to that rime, nearly all the clippers had been built in the northeast, and none south of the Chesapeake Bay. Despite this, Bowne and Curry had complete faith in the ability of their master shipwright, John Barrlum, to undertake the task.

Barrlum was born on Green Turtle Cay in the Bahamas in 1814. As a boy, he frequented the island&#39;s boar yards and became fascinated by the process of building warercrafr. Ar eighteen, he was already captai n of a schooner engaged in salvaging wrecked vessels in the Bahamas and the Florida Keys. During visits to Key West to obtain supplies, he came to know Bowne and C urry. In 1845, despite his never having served as an app rentice in a shipyard, Barrlum became their master shipwright and a permanent resident of Key West. Between 1847 and 1854 he built at least five schooners, the largest of which was the pilot schooner Florida at 171 tons and 90 feet. Impressed by rhe schooner Barrlum was building, in 1854 Bowne and

C urry entrusted him with the responsibility ofbuilding a medium clipper of nearly 1,000 tons. Ir was a formidable task for a self-taught shipwright, bur Barrlum did not hesitate to start wo rk. With the exception of the wood for the keel, which was purchased from New York, the ship was built from native timber of the Keys and south Florida, including madeira (mahogany) for beams, knees and timbers, and live oak, cedar, logwood, horsewood, dogwood, and yellow pine. She was said to be the only clipper in the world built with mahogany timber and came to be known as the &quot;mahogany clipper.&quot; Barrlum began construction in June of 1854. By December, many of her frames were in place, bur there was still a long way to go. Construction continued through 185 5 and well into 1856. Bowne and C urry serrhe launch dare for 14 August 1856 and named their new clipper after Key West&#39;s most prominent citizen, Florida senato r Stephen R. Mallory, and had a li fe-size figurehead of the senator mounted on the ship&#39;s bow. A Key West correspondent for the New York Herald newspaper wrote, &#39;&#39;After her launch

(above) Shipbuilder j ohn Bartlum (right) Florida senator Stephen R. Mallory, the man for whom the new Bowne and Curry clipper ship was named in 1856, became Secretary of the Navy of Confederate States ofAmerica in March of 1861, a position he held for the duration ofthe war. (left) Key West ca. 1856 Lithograph, Chandler and Company, Boston. 1he South was not known for shipbuilding, yet the Key West firm ofBowne and Curry decided to get in on the action taking highly profitable cargos to California&#39;s Gold Rush boom town by building their own clipper ship to do it.