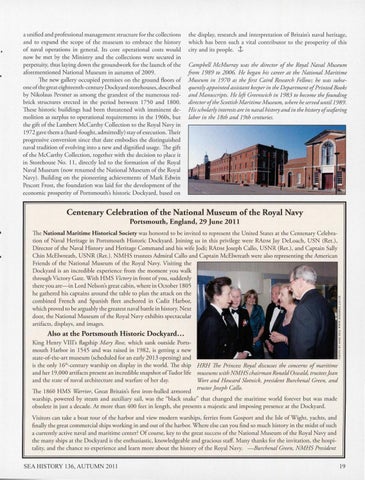 a unified and professional management structure for the collections and to expand the scope of the museum to embrace the history of naval operations in general. Its core operational costs would now be met by the Ministry and the collections were secured in perperuiry, thus laying down the groundwork for the launch of the aforementioned National Museum in autumn of2009. The new gallery occupied premises on the ground floors of one of the great eighteenth-century Dockyard storehouses, described by Nikolaus Pevsner as among the grandest of the numerous redbrick structures erected in the period between 1750 and 1800. These historic buildings had been threatened with imminent demolition as surplus to operational requirements in the 1960s, bur the gifr of the Lambert McCarthy Collection to rhe Royal Navy in 1972 gave them a (hard-fought, admittedly) stay of execution. Their progressive conversion since rhar dare embodies the distinguished naval tradition of evolving into a new and dignified usage. The gifr of the McCarthy Collection, together with the decision to place it in Storehouse No. 11, directly led to the formation of the Royal Naval Museum (now renamed the National Museum of rhe Royal Navy). Building on rhe pioneering achievements of Mark Edwin Pescorr Frosr, rhe foundation was laid for rhe development of the economic prosperiry of Porrsmouth&#39;s historic Dockyard, based on

rhe display, research and interprerarion of Britain&#39;s naval heritage, which has been such a vital contributor to rhe prosperiry of rhis ciry and irs people. ,t Campbell McMurray was the director of the Royal Naval Museum from 1989 to 2006 He began his career at the National Maritime Museum in 1970 as the first Caird Research Fellow; he was subsequently appointed assistant keeper in the Department ofPrinted Books and Manuscripts. He left Greenwich in 1983 to become the founding director ofthe Scottish Maritime Museum, where he served until 1989. His scholarly interests are in naval history and in the history ofseafaring labor in the 18th and 19th centuries.

Also at the Portsmouth Historic Dockyard . .. King Henry VIII&#39;s flagship Mary Rose, which sank ourside Porrsmourh Harbor in 1545 and was raised in 1982, is gerring a new srare-of-rhe-art museum (scheduled for an early 2013 opening) and is rhe only 16th-century warship on display in rhe world. The ship and her 19,000 artifacts present an incredible snapshot ofTudor life and rhe srare of naval architecture and warfare of her day.

The 1860 HMS ~rrior, Grear Britain&#39;s first iron-hulled armored warship, powered by steam and auxiliary sail, was rhe &quot;black snake&quot; rhar changed rhe maritime world forever bur was made obsolete in jusr a decade. Ar more rhan 400 feer in lengrh, she presents a majestic and imposing presence ar rhe Dockyard. Visitors can rake a boar tour of rhe harbor and view modern warships, ferries from Gosport and rhe Isle of Wighr, yachrs, and finally rhe grear commercial ships working in and our of the harbor. Where else can you find so much history in rhe midsr of such a currently active naval and maritime center? Of course, key to rhe great success of the National Museum of rhe Royal Navy and the many ships ar rhe Dockyard is rhe enthusiastic, knowledgeable and gracious sraff. Many rhanks for rhe invirarion, rhe hospiraliry, and rhe chance to experience and learn more about rhe history of the Royal Navy. -Burchenal Green, NMHS President