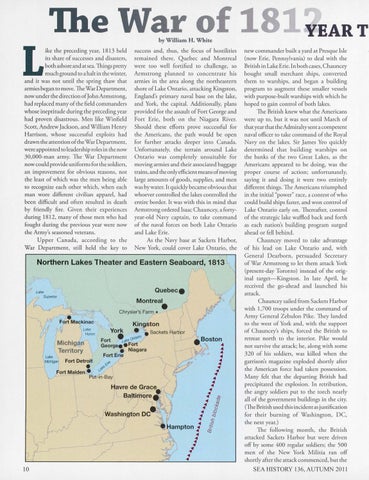 ike the preceding year, 1813 held its share of successes and disasters, bothashoreandatsea. Things pretty much ground to a halt in the winter, and it was not un til the spring thaw that armies began to move. The War Department, now under the direction ofJohnArmstrong, had replaced many of the field commanders whose ineptitude during the preceding year had proven disastrous. Men like Winfield Scott, Andrew Jackson, and William Henry H arrison, whose successful exploits had drawn the attention of the War Department, were appointed to leadership roles in the now 30,000-man army. The War Department now could provide un iforms for the soldiers, an improvement for obvious reasons, not the least of which was the men being able to recognize each other which, when each man wore different civilian apparel, had been difficult and often resulted in death by friendly fire . Given their experiences during 1812, many of those men who had fought during the previous year were now the Army&#39;s seasoned veterans. U pper Can ada, according to the War Department, still held the key to

success and, thus, the focus of hostilities remained there. Quebec and Montreal were too well fortified to challenge, so Armstrong p lanned to concentrate his armies in the area along the northeastern shore of Lake Ontario, attacking Kingston, England&#39;s primary naval base on the lake, and York, the capital. Additionally, plans provided for the assault of Fort George and Fort Erie, both on the Niagara River. Should these efforts prove successful for the Americans, the path would be open for further attacks deeper into Canada. Unfortunately, the terrain around Lake Ontario was completely unsuitable for moving armies and their associated baggage trains, and the only efficient means ofmoving large amounts of goods, supplies, and men was by water. It quickly became obvious that whoever controlled the lakes controlled the entire border. It was with this in mind that Armstrong ordered Isaac Chauncey, a fortyyear-old Navy captain, to take command of the naval forces on both Lake Ontario and Lake Erie. As the Navy base at Sackets Harbor, New York, could cover Lake Ontario, the

new commander built a yard at Presque Isle (now Erie, Pennsylvania) to deal with the British in Lake Erie. In both cases, Chauncey bought small merchant ships, converted them to warships, and began a building program to augment these smaller vessels with purpose-built warships with which he hoped to gain control of both lakes. The British knew what the Americans were up to, but it was not until March of that year that theAdmiral ty sent a competent naval officer to take command of the Royal Navy on the lakes. Sir James Yeo quickly determined that building warships on the banks of the two Great Lakes, as the Americans appeared to be doing, was the proper course of action; unfortunately, saying it and doing it were two entirely different things. The Americans triumphed in the initial &quot;power&quot; race, a contest of who could build ships faster, and won control of Lake Ontario early on. Thereafter, control of the strategic lake waffled back and forth as each nation&#39;s building program surged ahead or fell behind. Chauncey moved to take advantage of his lead on Lake Ontario and, with General Dearborn, persuaded Secretary of War Armstrong to let them attack York (present-day Toronto) instead of the original target-Kingston. In late April, he received the go-ahead and launched his attack. Chauncey sailed from Sackets Harbor with 1,700 troops under the command of Army General Zebulon Pike. They landed to the west of York and, with the support of Chauncey&#39;s ships, forced the British to retreat north to the interior. Pike would not survive the attack; he, along with some 320 of his soldiers, was killed when the garrison&#39;s magazine exploded shortly after the American force had taken possession. Many felt that the departing British had precipitated the explosion . In retribution, the angry soldiers put to the torch nearly all of the government buildings in the city. (The British used this incident as justification for their burning of Washington, DC, the next year.) The following month, the British attacked Sackets Harbor but were driven off by some 400 regular soldiers; the 500 men of the New York Militia ran off shortly after the attack commenced, but the