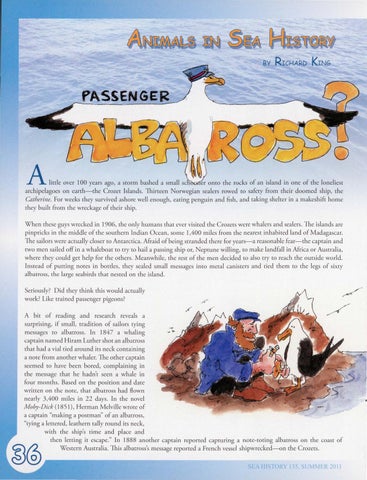 little ovor 100 yws ago, a storm b&#39;5hed a small sdi &quot; onto the rocks of m ishnd in one of the loneliest archipelagoes on eanh-rhe Crozer Islands. Thirteen Norwegian sealers rowed to safety from rheir doomed ship, rhe Catherine. For weeks rhey survived ashore well enough, earing penguin and fish , and raking shelrer in a makeshifr home rhey builr from rhe wreckage of rheir ship. When rhese guys wrecked in 1906, the only humans that ever visired the Crozets were whalers and sealers. The islands are pinpricks in the middle of the southern Indian Ocean, some 1,400 miles from the nearest inhabited land of Madagascar. The sailors were actually closer to Antarctica. Afraid of being srranded rhere for years-a reasonable fear-the captain and rwo men sailed off in a whaleboat to try to hail a passing ship or, Neprune willing, to make landfall in Africa or Ausrralia, where rhey could ger help for the others. Meanwhile, the resr of rhe men decided to also try to reach rhe ourside world. Instead of putting nores in bottles, they sealed small messages into metal canisters and ried them to rhe legs of sixty albatross, the large seabirds that nested on the island. Seriously? Did they rhink this would actually work? Like trained passenger pigeons? A bit of reading and research reveals a surprising, if small, tradition of sailors tying messages to albarross. In 1847 a whaling captain named Hiram Lurher shot an albarross rhat had a vial tied around its neck containing a note from another whaler. The other caprain seemed to have been bored, complaining in the message that he hadn&#39;t seen a whale in four months. Based on the position and date written on the nore, that albatross had flown nearly 3,400 miles in 22 days. In the novel Moby-Dick (1851), Herman Melville wrote of a captain &quot;making a posrman&quot; of an albauoss, &quot;tying a lettered, learhern tally round irs neck, with the ship&#39;s time and place and then lening ir escape.&quot; In 1888 another captain reported capturing a note-toting albatross on the coast of Wesrern Australia. This albatross&#39;s message reported a French vessel shipwrecked-on the Crozets. SF-A lll&#39;iTORY 135, SL1\i1MFR 2011