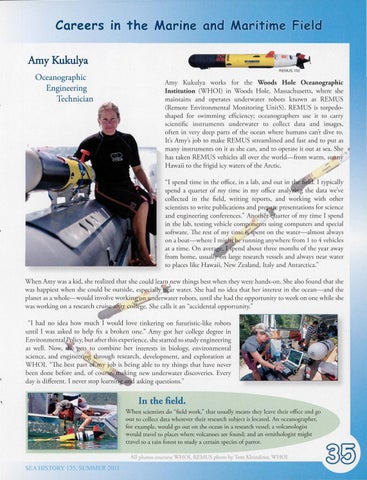 Amy Kukulya works for the Woods Hole Oceanographic Institution (WHOI) in Woods Hole, Massachusetts, where she maintains and operates underwater robots known as REMUS (Remote Environmental Monitoring UnitS). REMUS is torpedoshaped for swimming efficiency; oceanographers use it to carry scientific instruments underwater to collect data and images, often in very deep parts of the ocean where humans can&#39;t dive to. It&#39;s Amy&#39;s job to make REMUS streamlined and fast and to put as many instruments on it as she can, and to operate it out at sea. She has taken REMUS vehicles all over the world-from warm, sunny Hawaii to the frigid icy waters of the Arctic. &quot;

&quot;I spend time in the office, in a lab, and out in h fi , . I typically spend a quarter of my time in m y office anal ing the data we&#39;ve collected in the field, writing reports, and working with other scientists to write publications and prepa presentations for science and engineering conferences.&quot; Anoth r q arter of my time I spend in the lab, testing vehicle compone ts using computers and special software. The rest of my tim ·i: pent on the water-almost always on a boat-where I mign be running anywhere from 1 to 4 vehicles at a time. On average, pend about three months of the year away n large research vessels and always near water from home, usual to places like H awaii, New Zealand, Italy and Antarctica.&quot; When Amy was a kid, she realized that she could learn new things best when they were hands-on. She also found that she was happiest when she could be outside, esRecially ar water. She had no idea that her interest in the ocean-and the planet as a whole-would involve workin ,on nderwater robots, until she had the opportunity to work on one while she ,~,r co&#39;ilege. She calls it an &quot;accidental opportunity.&quot; was working on a research crui &quot;I had no idea how much I would love tinkering on futuristic-like robots until I was asked to help fix a broken one.&quot; Amy got her college degree in Environmental o icy, but after this experience, she started to study engineering as well. Now, gets to combine her interests in biology, environmental science, and engineer·ng i;!irough research , development, and exploration at WHOI. &quot;The best part • my job is being able to try things that have never been done before and, of cour making new underwater discoveries. Every day is different. I never stop learning an · asking questions.&quot;

In the field. When scientists do &quot;field work,&quot; that usually means they leave their office and go our ro collect data wherever their research subject is located. An oceanographer, for example, would go our on rhe ocean in a research vessel; a volcanologisr would travel to places where volcanoes are found; and an ornithologist might travel ro a rain forest to study a certain species of parrot.

All photos counesy WHO!, REMUS photo by Tom Kleindinst, WHO!