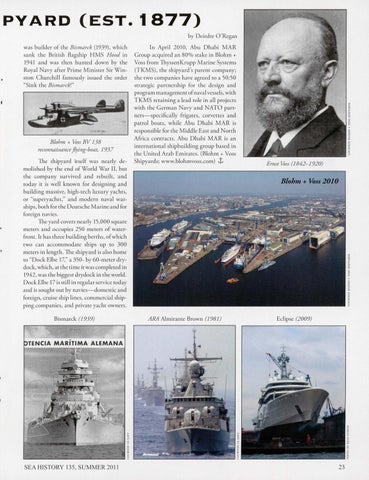 was builder of the Bismarck (1939), which sank the British flagship HMS Hood in 1941 and was then hunted down by the Royal Navy after Prime Minister Sir Winston Churchill famously issued the order &quot;Sink the B ismarck!&quot;

The shipyard itself was nearly demolished by the end of World War II, but the company survived and reb uilt, and today it is well known for designing and building massive, high-tech luxury yachts, or &quot;superyachrs,&quot; and modern naval warships, both for the Deutsche Marine and for foreign navies. The yard covers nearly 15,000 square meters and occupies 250 meters of waterfront. Ir has three building berths, of which two can accommodate sh ips up to 300 meters in length. The shipyard is also home to &quot;Dock Elbe 17,&quot; a 350- by 60-meter drydock, which, at the time it was completed in 1942, was the biggest drydock in the world. Dock Elbe 17 is still in regular service today and is sought our by navies-domestic and foreign, cruise ship lines, commercial shipping companies, and private yacht owners. Bismarck (1939)

In Apri l 2010, Abu Dhabi MAR Group acquired an 80% stake in Blohm + Voss from 1hyssenKrupp Marine Systems (TKMS), the shipyard&#39;s parent company; the two companies have agreed to a 50:50 strategic partnership for the design and program management of naval vessels, with TKMS retaining a lead role in all projects with the German Navy and NATO partners-specifically frigates, corvettes and patrol boars, while Abu Dhabi MAR is responsible for rhe Midd le East and North Africa contracts. Abu Dhabi MAR is an international shipbuilding group based in the United Arab Emirates. (Blohm + Voss Shipyards; www.blohmvoss.com) ,!,