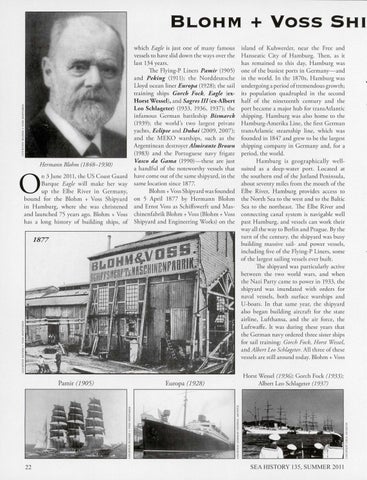 BLOHM +Voss SHI which Eagle is just one of many famous vessels to have slid down the ways over the last 134 years. The Flying-P Liners Pamir (1905) and Peking (1911); the Norddeutsche Lloyd ocean liner Europa (1928); the sail training ships Gorch Pock, Eagle (exHorst Wessel), and Sagres III (ex-Albert Leo Schlageter) (1933, 1936, 1937); the infamous German battleship Bismarck (1939); the world's two largest private yachts, Eclipse and Dubai (2009, 2007); and the MEKO warships, such as the Argentinean des troyer Almirante Brown (1983) and the Portuguese navy frigate Vasco da Gama (1990)-these are just Hermann Blohm (1848-1930) a handful of the noteworthy vessels that n 3 June 2011, the US Coast Guard have come out of the same shipyard, in the Barque Eagle will make her way sa me location since 1877. Blohm+ Voss Shipyard was founded up the Elbe River in Germany, bound for the Blohm + Voss Shipyard on 5 April 1877 by Hermann Blohm in H amburg, where she was christened and Ernst Voss as Schiffswerft und Masand launched 75 years ago. Blohm + Voss chinenfabrik Blohm+ Voss (Blohm+ Voss has a long history of building ships, of Shipyard and Engineering Works) on the

island of Kuhwerder, near the Free and Hanseatic City of Hamburg. Then, as it has remained to this day, Hamburg was one of the busiest ports in Germany-and in the world. In the 1870s, Hamburg was undergoing a period of tremendous growth; its population quadrupled in the second half of the nineteenth century and the port became a major hub for transAt!antic shipping. Hamburg was also home to the Hamburg-Amerika Line, the first German transAtlantic steamship line, which was founded in 1847 and grew to be the largest shipping company in Germany and, for a period, the world. Hamburg is geographically well suited as a deep-water port. Located at the southern end of the Jutland Peninsula, about seventy miles from the mouth of the Elbe River, Hamburg provides access to the North Sea to the west and to the Baltic Sea to the northeast. The Elbe River and connecting canal system is navigable well past Hamburg, and vessels can work their way all the way to Berlin and Prague. By the turn of the century, the shipyard was busy building massive sail- and power vessels, including five of the Flying-P Liners, some of the largest sailing vessels ever built. The shipyard was particularly active between the two world wars, and when the Nazi Party came to power in 1933, the shipyard was inundated with orders for naval vessels, both surface warships and U-boats. In that same year, the shipyard also began building aircraft for the state airline, Lufthansa, and the air force, the Luftwaffe. It was during these years that the German navy ordered three sister ships for sail training: Gorch Fock, Horst Wessel, and Albert Leo Schlageter. All three of these vessels are still around today. Blohm+ Voss Horst Wessel (1936); Gorch Fock (1933); Albert Leo Schlageter (1937)