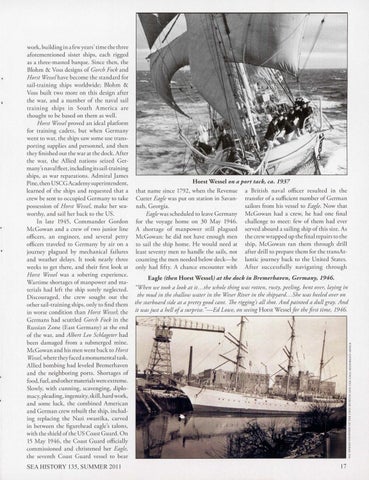 work, building in a few yea rs&#39; time the three aforementioned sister ships, each rigged as a three-masted barque. Since then, the Blohm &amp; Voss designs of Gorch Fock and Horst Wessel have become the standard for sail-training ships wo rldw ide; Blohm &amp; Voss built two more on this design after the war, and a number of the naval sai l tra ining ships in South America are thought to be based on them as well. Horst Wessel proved an ideal platform for training cadets, but when Germany went to war, the ships saw som e use transporting supplies and personnel, and then they finished out the wa r at the dock. After the war, the Allied nations seized Germany&#39;s naval fleer, including its sai l-training ships, as war reparations. Admiral James Pine, then USCG Academy superintendent, learned of the ships and requested that a crew be sent to occupied Germany to rake possession of Ho rst Wessel, make her seawo rthy, and sail her back to rhe US . In late 1945, Commander Gordon McGowan and a crew of two junior line officers, an engineer, and several petty officers traveled to Germany by air on a journey plagued by m echanical failures and weather delays. It took nearly three weeks to get there, and their first look at Horst Wessel was a sobering experience. Wartime shortages of manpower and materials had left the ship sorely neglected. Discouraged, the crew sought out the other sail-training ships, only to find them in wo rse condition than Ho rst Wessel; the Germans had scuttled Gorch Fock in the Russian Zone (East Germany) at the end of the war, and Albert Leo Schlageter had been damaged from a submerged mine. McGowan and his men we nt back to Ho rst Wessel, where they faced a monumental task. Allied bombing h ad leveled Bremerhaven and the neighboring ports. Shortages of food, fuel, and other materials were extreme. Slowly, wi th cunning, scavenging, diplomacy, pleading, ingenuity, skill, hard work, and some luck, the combined American and German crew rebuilt the ship, including replacing the Nazi swastika, carved in between the figurehead eagle&#39;s talons, with the shield of the US Coast Guard. On 15 May 1946, the Coast Guard officially commissioned and christened her Eagle, the seventh Coast Guard vessel to bear SEA HISTORY 135 , SUMMER 2011

Horst Wessel on a port tack, ca. 1937 that na me since 1792, when the Revenue C utter Eagle was put on station in Savannah, Georgia. Eagle was scheduled to leave Germ any for the voyage home on 30 May 1946. A shortage of manpower still plag ued McGowan: he did not have enough men to sail the ship home. He wo uld need at leas t seventy men to handle the sails, not counting the men needed below deck- he only h ad fifty. A chance encounter with

a British nava l officer resulted in the transfer of a sufficient number of German sailors from his vessel to Eagle. Now that McGowan had a crew, he had one final challenge to meet: few of them had ever served aboard a sailing ship of this size. As the crew wrapped up the final repairs to the ship, McGowan ran them through drill after drill to prepare them for the transArlantic journey back to the United States. After successfully navigating through

Eagle (then Horst Wessel} at the dock in Bremerhaven, Germany, 1946. &quot;When we took a look at it. .. the whole thing was rotten, rusty, peeling, bent over, laying in the mud in the shallow water in the Weser River in the shipyard. .. She was heeled over on the starboard side at a pretty good cant. The rigging&#39;s all shot. And painted a dull gray. And it was just a hell ofa surprise. &quot;-Ed Lowe, on seeing Horst Wessel for the first time, 1946.