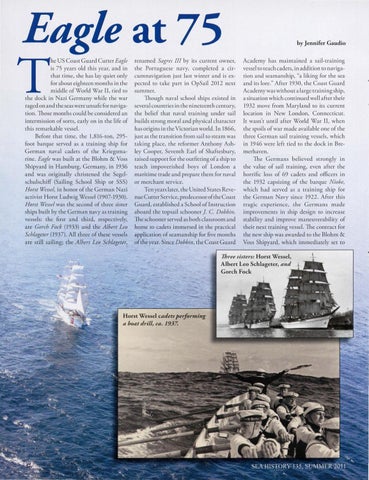 Eagleat75 T he US Coast Guard Cutter Eagle is 75 years old this year, and in that time, she has lay quiet only for ab our eighteen months in the middle of World War II, tied to the dock in Nazi Germany while the war raged on and the seas were unsafe for navigation. Those months could be considered an intermission of sorts, ea rly on in the life of this remarkable vessel. Before that time, the 1,816-ton, 295foot barque served as a training sh ip for German naval cadets of the Kriegsmarine. Eagle was built at the Blohm &amp; Voss Shipyard in Hamburg, Germany, in 1936 and was originally christened the Segelschulsch iff (Sa iling School Ship or SSS) Horst Wessel, in honor of the German Nazi activist Horst Ludwig Wessel (1907-1930). Horst Wessel was the second of three sister ships built by the German navy as training vessels: the first and third, respectively, are Gorch Fock (1933) and the Albert Leo Schlageter (1937). All three of these vessels are still sa iling; the Albert Leo Schlageter,

renamed Sagres III by its current owner, the Portuguese navy, completed a circumnavigation just last winter and is expected to take part in OpSail 2012 next su1nmer. Though naval school ships existed in several countries in the nineteenth century, the belief that naval training under sail builds strong moral and physical character has origins in the Victorian world. In 1866, just as the transition from sail to steam was taking place, the reformer Anthony Ashley Cooper, Seventh Earl of Shaftesbury, ra ised support for the outfitting of a ship to teach impoverished boys of London a maritime trade and prepare them for naval or merchant service. Ten years later, the United States Revenue Cutter Service, predecessor of the Coast Guard, established a School oflnstruction aboard the topsail schooner j. C. Dobbin. The schooner served as both classroom and home to cadets immersed in the practical application of seamanship for five months of the year. Since Dobbin, the Coast G uard

by Jennifer Gaudio Academy has maintained a sail-training vessel to teach cadets, in addition to navigation and seamanship, &quot;a liking for the sea and its lore.&quot; After 1930, the Coast Guard Academy was without a large training ship, a situation which continued well after their 1932 move from Maryland to its current location in New London, Connect icut. It wasn&#39;t until after World War II, when the spoils of war made available one of the three German sail training vessels, which in 1946 were left tied to the dock in Bremerhaven. The Germans believed strongly in the value of sail training, even after the horrific loss of 69 cadets and officers in the 1932 capsizing of the barque Niobe, which had served as a training ship for the German Navy since 1922. After this tragic experience, the Germans made improvements in ship design to increase stability and improve maneuverability of their next training vessel. The contract for the new ship was awarded to the Blohm &amp; Voss Shipyard, which immediately set to