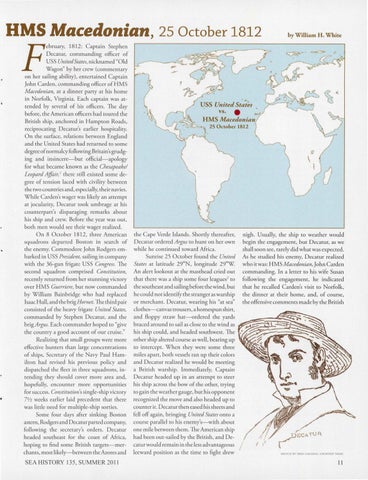 ebruary, 1812: Caprain Stephen Decatur, commanding officer of USS United States, nicknamed &quot;Old Wagon&quot; by her crew (commentary on her sailing abiliry), entertained Captain John Carden, commanding officer of HMS Macedonian, at a dinner parry at his home in Norfolk, Virginia. Each captain was attended by several of his officers. The day before, the American officers had toured the British ship, anchored in Hampton Roads, reciprocating Decatur&#39;s earlier hospitaliry. On the surface, relations berween England and the United States had returned to some degree ofnormalcy following Britain&#39;s grudging and insincere-but official-apology for what became known as the Chesapeake/ Leopard Affair, 1 there still existed some degree of tension laced with civiliry berween the rwo countries and, especially, rheir navies. While Carden&#39;s wager was likely an attempt at joculariry, Decatur took umbrage at his counterpart&#39;s disparaging remarks about his ship and crew. Before the year was out, both men wo uld see their wage r realized. On 8 October 181 2, three American sq uadrons departed Bosron in search of the enemy. Commodore John Rodgers embarked in USS President, sailing in company with the 36-gun frigate USS Congress. The second squadron comprised Constitution, recently returned from her stunning victory over HMS Guerriere, but now commanded by W illiam Bainbridge who had replaced Isaac Hull, and the brig Hornet. The rhird pair consisted of the heavy frigate United States, commanded by Stephen Decatur, and the brigArgus. Each commander hoped ro &quot;give rhe country a good account of our cruise.&quot; Realizing that small gro ups were more effective hunters than large concentrations of ships, Secretary of the Navy Paul Hamilton had revised his previous policy and dispatched the Aeet in three squadrons, intending they should cover more area and, hopefully, encounter more opportunities for success. Constitution&#39;s single-ship vicrory 7Y2 weeks earlier laid precedent that there was little need for multiple-ship sorties. Some four days after sinking Boston astern, Rodgers and Decatur parted company, following rhe secretary&#39;s orders. Decatur headed southeast for the coast of Africa, hoping to find some British targets-merchants, most likely-berween the Azores and

rJ the Cape Verde Islands. Shortly thereafter, Decatur ordered Argus to hunt on her own while he continued roward Africa. Sunrise 25 October found the United States at latitude 29°N, longitude 29°W. An alert lookout at the masthead cried out that there was a ship some four leagues 2 to rhe sourheast and sailing before rhewind, but he could not identify the stranger as warship or merchant. Decatur, wearing his &quot;at sea&quot; clothes-canvas trousers, a homespun shirt, and floppy straw hat-ordered the yards braced around to sai l as close to the wind as his ship could, and headed southwest. The other ship altered course as well, bearing up to intercept. When they were some three miles apart, both vessels ran up their colors and Decatur realized he would be meeting a British warship. Immediately, Captain Decatur headed up in an attempt to steer his ship across the bow of the other, trying to gain the weather gauge, bur his opponent recognized the move and also headed up to counter it. Decatur then eased his sheets and fell off again, bringing United States onto a course parallel to his enemy&#39;s-with about one mile berween them. The American ship had been out-sailed by the British, and Decaturwould remain in the less advantageous leeward position as the time to fight drew

nigh. Usually, the ship to weather would begin the engagement, bur Decatur, as we shall soon see, rarely did what was expected. As he studied his enemy, Decatur realized who itwas: HMS Macedonian, John Carden commanding. In a letter to his wife Susan following the engagement, he indicated that he recalled Carden&#39;s visit to Norfolk, the dinner at their home, and, of course, the offensive comments made by the British