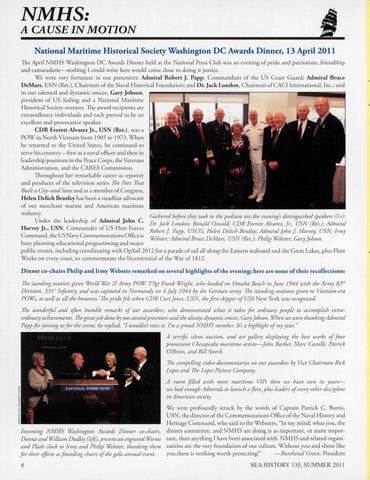 NMHS: A CAUSE IN MOTION

National Maritime Historical Society Washington DC Awards Dinner, 13 April 2011 The April NMHS Washington DC Awards Dinner held at the National Press Club was an evening of pride and patriotism, fri endship and camaraderie-nothing I could write here would come close to doing it justice. We were very fortunate in our presenters: Admiral Robert J. Papp, Commandant of the US Coast Guard; Admiral Bruce DeMars, USN (Ret.), Chairman of the Naval Historical Foundation; and Dr. Jack London, Chairman of CACI International, Inc.; and in our talented and dynamic emcee, Gary Jobson, president of US Sailing and a National Maritime Historical Society overseer. The award recipients are extraordinary individuals and each proved to be an excellent and provocative speaker. CDR Everett Alvarez Jr., USN (Ret.), was a POW in North Vietnam from 1965 to 1973. When he returned to the United States, he continued to serve his country-first as a naval officer and then in leadership positions in the Peace Corps, the Veterans Administration, and the CARES Commission. Throughout her remarkable career as reporter and producer of the television series The Port That Built a City-and State and as a member of Congress, Helen Delich Bentley has been a steadfast advocate of our merchant marine and American maritime industry. Gathered before they took to the podium are the evening&#39;s distinguished speakers (l-r): Under the leadership of Admiral John C. Dr. jack London; Ronald Oswald; CDR Everett Alvarez, Jr., USN (Ret.); Admiral Harvey Jr., USN, Commander of US Fleet Forces Robert J Papp, USCG; Helen Delich Bentley; Admiral john J Harvey, USN; Irmy Command, the US Navy Commemorations Office is Webster; Admiral Bruce DeMars, USN (Ret.); Philip Webster; Gary Jobson. busy planning educarional programming and major public events, including coordinating with OpSail 2012 for a parade of sail all along the Eastern seaboard and the Great Lakes, plus Fleet Weeks on every coast, to commemorate the bicentennial of the War of 181 2.

Dinner co-chairs Philip and Irmy Webster remarked on several highlights of the evening; here are some of their recollections: The standing ovation given World Wtir II Army POW TSgt Frank Wright, who landed on Omaha Beach in June 1944 with the Army 83d D ivision, 331&quot; Infantry, and was captured in Normandy on 4 July 1944 by the German army. The standing ovations given to Vietnam-era POWs, as well as all the honorees. The pride felt when CDR Curt Jones, USN, the first skipper of USS New York was recognized. The wonderful and often humble remarks of our awardees, who demonstrated what it takes for ordinary people to accomplish extraordinary achievements. The greatjob done by our award presenters and the always dynamic emcee, Gary Jobson. When we were thanking Admiral Papp for joining us for the event, he replied, &#39;1 wouldn&#39;t miss it. I&#39;m a proud NMHS member. It&#39;s a highlight of my year. &quot; A terrific silent auction, and art gallery displaying the best works of four prominent Chesapeake maritime artists-john Barber, Marc Castelli, Patrick OBrien, and Bill Storck. The compelling video-documentaries on our awardees by Vice Chairman Rick Lopes and The Lopes Picture Company. A room filled with more maritime VIPs then we have seen in yearswe had enough Admirals to launch a fleet, plus leaders ofevery other discipline in American society.

We were profoundly struck by the words of Captain Patrick C. Burns, USN, the director of the Commemorations Office of the Naval H istory and Heritage Command, who said to the Websters, &quot;In my mind, what you, the dinner committee, and NMHS are doing is as important, or more important, than anything I have been associated with. NMHS and related organizations are the very foundation of our culture. Without you and those like yo u, there is nothing worth protecting!&quot; -Burchenal Green, President SEAHISTORY 135, SUMMER2011