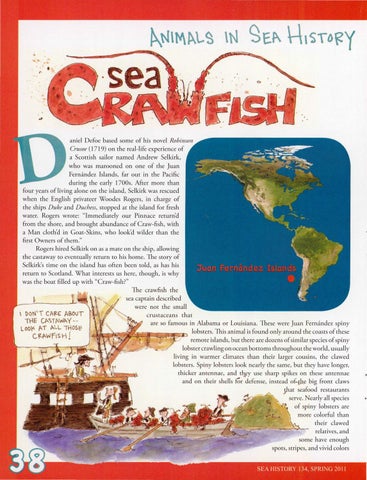 aniel D efoe based some of his novel Robinson Crusoe (1719) on rhe real-life experience of a Scottish sailor named Andrew Selkirk, who was marooned on one of the Juan Fernandez Islands, fa r our in the Pacific during the early 1700s. After more than fo ur years of living alone on the island, Selkirk was rescued when the English privateer Woodes Rogers, in ch arge of the ships D uke and D uchess, stopped at the island for fresh water. Rogers wrote: &quot;Immediately our Pinnace rerurn&#39;d from the shore, and brought abundance of C raw-fish, with a Man clorh&#39;d in G oar-Skins, who look&#39;d wilder than the first O wners of them .&quot; Rogers hired Selkirk on as a mare on the ship, allowing the castaway to eventually return to h is home. The story of Selkirk&#39;s rime on the island has often been told, as has his return to Scotland. W hat interests us here, though, is why was the boar fill ed up with &quot;Craw-fish?&quot; The crawfish the 1 sea captain described were nor the small t&gt;ON 1 \ CM&#39;.. ÂŁ ABO\JT crustaceans rhar \HE Ct&gt;.~TP..Wf:&gt;..Y-Â­ are so fam ous in Alabama or Louisiana. These were Juan Fernandez spiny LOO\&lt; f&gt;,T P..&#39;-l.. 1\-lOSElobsters. This animal is fo und only around the coasts of these C~WflS H remote islands, bur th ere are dozens of similar species of spiny lobster crawling on ocean bo ttoms rhroughour the world, usually living in warmer climates than their larger cousins, rhe clawed lobsters. Spiny lobsters look nearly rhe sam e, bur they have longer, thi cker antennae, and rh;:y use sharp spikes on these antennae and on their shells for defense, instead of..t, bs:: big front claws ,shat seafood resrauran rs serve. Nearly all species 19 . f spiny lobsters are &quot;t.:.. ,, more colorful than their clawed \ relatives, and some have enough spots, stripes, and vivid colors