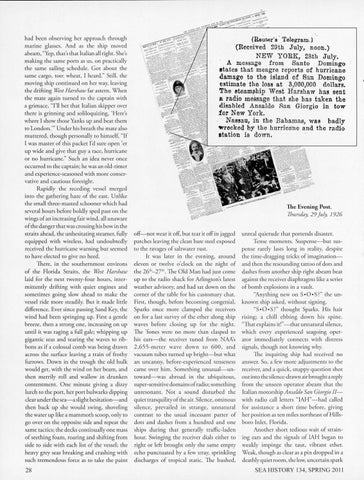 had been observing her approach through marine glasses. And as the ship moved abeam, &quot;Yep, that&#39;s that Italian all right. She&#39;s making the sam e ports as us, on practically the sam e sailing schedule. Got about the same cargo, too : wheat, I heard.&quot; Still, the moving ship continued o n her way, leaving the drifting West Harshaw far as tern . When the m ate again turned to the captain with a grimace, &#39;TU bet that Italian skipper over there is grinning and soliloquizing, &#39;H ere&#39;s where I show those Yanks up and beat them to London.&quot;&#39; Under his breath the m ate also muttered, though personally to himself, &quot;If I was m aster of this packet I&#39;d sure open &#39;er up wide and give that guy a race, hurricane or no hurricane.&quot; Such an idea never once occurred to the captain; he was an old-timer and experience-seasoned wi th more conservative and cautious fo resigh t. Rapidly the recedin g vessel merged into the gathering haze of the east. Unlike the small three-masted schooner which had several hours before boldly sped pas t on the wings of an increasing fair wind, all unaware of the danger that was crossing his bow in the straits ahead, the unhesitating steamer, fully equipped wi th wireless, had undoubtedly received the hurricane warning but seem ed to have elected to give no heed. There, in the southernmost environs of the Florida Straits, the West Harshaw laid for the next twenty-four hours, intermittently drifting with quiet engines and sometimes going slow ahead to make the vessel ride more steadily. But it made little difference. Ever since passing Sand Key, the wind had been springing up. First a gentle breeze, then a strong one, increasing o n up until it was raging a full gale; whipping up gigantic seas and tearing the waves to ribbons as if a colossal comb was bei ng d rawn across the surface leaving a train of frothy furrows. Down in the trough the old hulk would get, with the wind on her beam , and then m errily roll and wallow in drunken contentment. One minute giving a dizzy lurch to the port, her port bulwarks dipping clear under the sea-a slight hesitation-and then back up she would swing, shoveling the water up like a mammoth scoop, only to go over on the opposite side and repeat the same tactics; the decks continually one mass of seething foam, roaring and shifting from side to side with each list of the vessel; the heavy grey seas breaking and crashing with such tremendous force as to take the paint

damage to the island of San Domingo estimate the loss at 31000,000 dollars. The eteam~bip West Harshaw has sent Jt

radio message that she has taken the

disabled Ansaldo 8an Giorgio in tow

for New York. Nnasau, in the ·Bahamas, was badly wrecked by the hurrica·ue and the radio station is down.

off-not wear it off, but tear it off in jagged patches leaving the clean bare steel exposed to the ravages of saltwater rust. Ir was later in the evening, around eleven or twelve o&#39;clock on the night of the 26rh_27rh . The O ld Man had just come up to the radio shack fo r Arlington&#39;s latest weather advisory, and had sat down on the corner of the table for his customary char. First, though, before becoming congenial, Sparks once more clamped the receivers on for a last survey of the ether alo ng ship waves before closing up fo r the night. The &#39;fones were no more than clasped to his ears-the receiver tuned from NAA&#39;s 2,655-meter wave down to 600, an d vacu um tubes turned up bright-but what an uncanny, befo re-experienced tenseness came over him. Som ething unusual- untoward-was abroad in the ubiquitous, super-sensitive domains of radio; so mething unresonant. No r a sound disturbed the quiet tranquility of the air. Silence, ominous silence, prevailed in strange, unnatural contrast to the usual incessant patter of dots and dashes from a hundred and one ships during that generally traffi c-laden hour. Swinging the receiver dials either to right or left brought only the same empty echo punctuated by a few stray, sprinkling discharges of tropical static. The hushed ,

unreal quietude that portends disaster. Tense moments. Suspense-bur suspense rarely las ts long in reality, des pite the time-dragging tricks of imaginationand then the resounding tattoo of dots and dashes from another ship right abeam beat against the receiver diaphragms like a series of bomb explosions in a vault. &quot;Anything new on S •O• S?&quot; the unknown ship asked, without signing. &quot;S •O •S?&quot; th ought Sparks. His hair rising; a chill ebbing down hi s spine. &quot;That explains it!&quot; -that unnatural silence, which every experienced seagoing operato r immediately connects with distress signals, though not knowing why. The inquiring ship had received no answe r. So, a few more adjustments to the receiver, and a quick, snappy question shot out into the silence-drawn air brought a reply from the unseen operator abeam that the Italian mororship Ansaldo San Giorgio!!wi th radio call letters &quot;IAH&quot; -had called for assistance a short time before, giving her position as ten miles norrheast of Hi llsboro Inlet, Florida. Another short tedio us wait of straining ears and the signals of IAH began to weakly impinge the tau t, vibrant ether. Weak, though as clear as a pin dropped in a deathly quiet room, the low, uncertain spark SEA HISTORY 134, SPRING 20 11