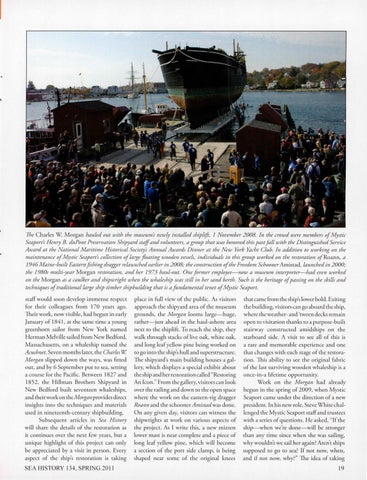 The C harles W Morgan hauled out with the museum&#39;s newly installed shiplift, 1 November 2 008. In the crowd were members ofMystic Seaport&#39;s H enry B. duPont Preservation Shipyard staffand volunteers, a group that was honored this pastfaff with the Distinguished Service Award at the National Maritime Historical Society&#39;s Annual Awards D inner at the New York Yacht Club. In addition to working on the maintenance ofMystic Seaport&#39;s collection of Large floating wooden vessels, individuals in this group worked on the restoration a/Roan n, a 1946 Maine-built Eastern fishing dragger relaunched earlier in 2 008; the construction ofthe Freedom Schooner Amis tad, Launched in 2 000; the 1980s multi-year Morgan restoration, and her 1973 haul-out. One former employee- now a museum interpreter-had even worked on the Morgan as a caulker and shipwright when the whaleship was still in her sand berth. Such is the heritage ofpassing on the skills and techniques oftraditional large ship timber shipbuilding that is a fundamental tenet ofMystic Seaport.

staff would soo n develop immense respect for their colleagues from 170 yea rs ago. Their work, now visible, had begun in ea rly January of 1841 , at the same time a young greenhorn sail or from New York named H erman Melville sailed from New Bedford, M assachusetts, on a whaleship named the Acushnet. Seven months later, the Charles W Morgan slipped down the ways, was fitted out, and by 6 September put to sea, setting a course for the Pacific. Between 1827 and 1852, the Hillman Brothers Shipya rd in New Bedford built seventeen whaleships, and their work on theMorgan provides direct insights into the techniques and materials used in nineteenth-century shipbuilding. Subsequent articles in Sea H istory will share rhe derails of the resto ration as it continues over the next few yea rs, but a unique highlight of this proj ect can only be appreciated by a visit in perso n. Every aspect of the ship&#39;s restoration is taking

place in full view of the public. As visitors approach the shipya rd area of the museum gro unds, the Mo rgan looms large-huge, rather-just ahead in the haul-ashore area next to the shiplifr. To reach rhe ship, they walk through stacks of!ive oak, white oak, and long leaf yellow pine being worked on to go into the ship&#39;s hull and superstructure. The shipyard&#39;s main building houses a gallery, which displays a special exhibit about the ship and her resto ra tion called &quot;Restoring An Icon.&quot; From the gallery, visitors can look over the railing and down to the open space where the work on the eas tern-rig dragger Roann and the schooner Amistad was done. On any given day, visitors can witness the shipwrights at wo rk on various aspects of the project. As I write this, a new mizzen lower mas t is near complete and a piece of long leaf yellow pine, which will become a section of the port side clamp, is being shaped near some of the original knees

that came from theship&#39;s lower hold. Exiting the building, visitors can go aboard the ship, where rhe weather- and &#39;tween decks remain open to visitation thanks to a purpose-built stairway constructed amids hips on the starboard side. A visit to see all of this is a rare and memorable experience and one that changes with each stage of the restoration. This ability to see the original fab ri c of the last surviving wooden whaleship is a once- in-a lifetime opportunity. Work on the Morgan had already begun in the spring of2009 , when M ys tic Seaport came under the direction of a new pres ident. In his new role, Steve White challenged the Mystic Seaport staff and trustees with a series of questions. He asked, &quot;If the ship-wh en we&#39;re done-will be stronger than any tim e si nce when she was sailing, why wou ldn&#39;t we sail her again? Aren&#39;t ships supposed to go to sea? If nor now, when, and if not now, why?&quot; The idea of taking