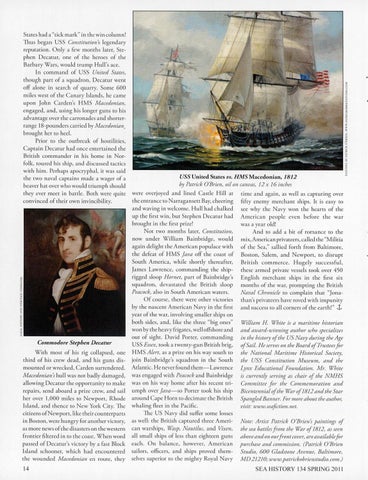 States had a &quot;tick mark&quot; in the win column! Thus began USS Constitution&#39;s legendary reputation . Only a few month s late r, Stephen Decatur, one of the heroes of the Barbary Wars, would trump Hull &#39;s ace. In command of USS United States, though part of a squadron, D ecatur went off a lone in sea rch of quarry. Some 60 0 miles west of the Canary Islands, he ca me upon John Carden&#39;s HMS Macedonian, engaged, and, using hi s longer guns to hi s advantage over the ca rro nades and shorrerrange 18-pounders carried by Macedonian, brought her to heel. Prior to the outbreak of hostilities, Captain D ecatur had once entertained the British comma nder in his home in No rfo lk, toured hi s ship, and discussed tactics wit h him. Perhaps apocryp hal, it was said the two naval captains mad e a wage r of a beaver hat over who wou ld triumph should th ey ever meet in battle. Both were quite convinced of thei r own invincibility.

Commodore Stephen Decatur With most of his rig collapsed, one third of his crew dead, and his guns dismounted or wrecked, Ca rden surrendered. Macedonians hull was not badly damaged, allowing D ecatur the opportun ity to make repairs, send aboard a prize crew, and sail her over 1,000 miles to Newport, Rhode Island, and thence to New York City. The citizens ofNewporr, like their counterparts in Boston, were hungry fo r another victory, as more news of the disasters on the western frontier filtered in to the coast. When word passed of D ecatu r&#39;s victo ry by a fast Block Island schooner, which had encountered the wounded M acedonian en route, they

USS United States vs. HMS Macedonian, 1812 by Patrick O&#39;Brien, oil on canvas, 12 x 16 inches were overj oyed and lined Cas tle Hill at the entrance to Na rraga nsett Bay, cheering and waving in welcome. Hull had chalked up the first win, but Stephen D ecatur had brought in the first prize! Not two months later, Constitution, now under Wi lliam Bainbridge, wou ld again delight the American populace w it h the defeat of HMS Java off the coast of South America, while shortly thereafrer, James Lawrence, commanding the shipri gged sloop Ho rnet, pa rt of Bainbridge&#39;s squadron , devas tated the British sloop Peacock, also in South American waters. Of course, there were other victories by the nascent American Navy in the first yea r of the war, involving sma ller ships on both sides, and, like the three &quot; big ones&quot; won by the heavy frigates, well offshore a nd out of sight. D avid Porter, comma nding USS Essex, rook a twenty-gun British brig, HMS A lert, as a prize on his way south to join Bainbridge&#39;s squadron in the South Atlantic. He never found them-Lawrence was engaged with Peacock and Bainbridge was on his way home after his recent triumph over Java-so Porter rook his ship aro und Cape Horn to decimate the British whaling fleet in the Pacific. The US Navy did suffer some losses as well : the British captured three American wa rships, Wasp, Nautilus, and Vixen, all small ships of less than eighteen guns each . On balance, however, American sailors, officers, and ships proved themselves superior to the mighty Royal Navy

time and aga in , as well as capturing over fift y enemy m erchant ships. Ir is easy to see why the Navy won the hearts of the A m erican people even before the war was a year old! And to add a bit of romance to the mix, American privateers, called the &quot;Militia of the Sea,&quot; sallied forth from Baltimore, Boston, Salem, and Newport, to disrupt British com m erce. Hugely successfu l, these arm ed private vessels took over 45 0 English merchant ships in the first six months of the war, prompting the British Naval Chronicle ro complain that &quot;Jonathan&#39;s privateers have roved with impunity and success to all corners of the earth! &quot; j:,

William H. White is a maritime historian and award-winning author who specializes in the history ofthe US Navy during the Age ofSail. He serves on the Board of Trustees for the National Maritime H istorical Society, the USS Constitution M useum, and the Lynx Educational Foundation. Mr. White is currently serving as chair of the NMHS Committee for the Commemoration and Bicentennial ofthe War of1812 and the Star Spangled Banner. For more about the author, visit: www.seafiction.net. Note: Artist Patrick O&#39;Brien&#39;s paintings of the sea battles from the War of 1812, as seen above and on ourfront cover, are availablefor purchase and commission. (Patrick O &#39;Brien Studio, 600 Gladstone Avenue, Baltimore, MD 21210; www.patrickobrienstudio.com.)