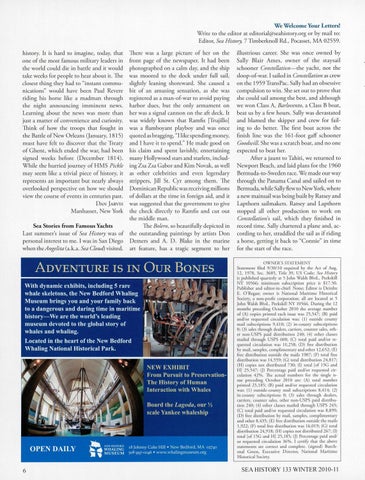 We Welcome Your Letters! Write to rhe editor at editorial@seahistory.org or by mail to: Editor, Sea H istory, 7 Timberknoll Rd. , Pocasset, MA 02559. history. It is hard to imagine, today, rhat one of rhe mosr famous military leaders in rhe world could die in battle and ir would rake weeks for people to hear about ir. The closest rhing rhey had to &quot;instant communications&quot; would have been Paul Revere riding his horse like a madman rhrough rhe nighr announcing imminent news. Learning abour the news was more rhan just a matter of convenience and curiosi ry. Think of how rhe rro ops char foughr in rhe Battle of New Orleans Qanuary, 1815) musr have felr to discover rhar the Treary of Ghenr, which ended the war, had been signed weeks before (December 181 4). While the hurried journey of HMS Pickle may seem like a rrivial piece of history, it represenrs an importanr bur nearly always overlooked perspecrive on how we sho uld view rhe course of evenrs in cenruries pasr. DAN JARVIS Manhasset, New York

There was a large picrure of her o n the from page of the newspaper. It had been photographed on a calm day, and the ship was moored to the dock under full sail, slightly leaning shoreward. She caused a bit of an amusing sensation, as she was regisrered as a man-of-war to avoid paying harbor dues, but the only armamenr on her was a signal cannon on the aft deck. It was widely known that Ramfis [Trujillo] was a flamboyanr playboy and was once quoted as braggi ng, &quot;I like spending money, and I have it to spend.&quot; H e made good on his claim and spenr lavishly, entertaining many Hollywood stars and starlets, including Zsa Zsa Gabor and Kim Novak, as well as other celebrities and even legendary strippers, Jill Sr. Cyr among them . The Dominican Republic was receiving millions of dollars at the rime in foreign aid, and it was suggested that the government to give the check directly to Ramfis and cut out rhe middle m an. The Bolero, so beautifully depicted in Sea Stories from Famous Yachts Lasr summer&#39;s issue of Sea H istory was of the outstanding painrings by artisrs Don personal inreresr to me. I was in San Diego Demers and A. D . Blake in the marine when theAngelita (a. k.a. Sea Cloud) visired. art feature, has a tragic segment to her

ADVENTURE IS IN OUR BONES

illustrious career. She was once owned by Sally Blair Ames, owner of the staysail schooner Constellation-the yacht, not the sloop-of-war. I sailed in Constellation as crew on the 1959 TransPac. Sally had an obsessive compulsion to wi n. She set out to prove thar she could sail among the best, and alrhough we wo n Class A, Barlovento, a Class B boat, beat us by a few hours. Sally was devastated and blam ed the skipper and crew for failing to do better. The first boat across rhe finish line was the 161 -foot gaff schooner Goodwill. She was a scratch boat, and no one expected to beat her. After a jaunt to Tahiti, we rerurned to Newporr Beach, and laid plans for the 1960 Bermuda-to-Sweden race. We made our way through rhe Panama Canal and sailed on to Bermuda, while Sally fl ew to New York, where a new mainsail was being built by Ratsey and Lapthorn sailmakers. Ratsey and Lapthorn stopped all other production to work on Constellation&#39;s sail, which they finished in record time. Sally chartered a plane and, according to her, straddled the sail as if riding a horse, getting it back to &quot;Connie&quot; in time for the start of the race. OWNER&#39;S STATEMENT Statem ent fi led 9/30/ l 0 required by th e Act of Aug. 12, 1970, Sec. 3685, T ide 39, US Code: Sea History is published quarterly at 5 John Walsh Blvd. , Peekskill NY 10566; minimum subscription price is $ 17.50. Publisher and editor-in -chief: No ne; Ed itor is D eirdre E. O &gt;Rega n; owner is N ational Mar it ime Histo rical