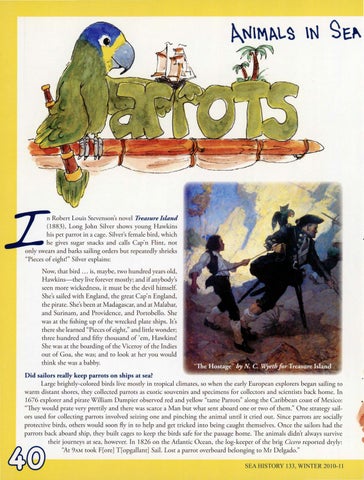 n Robert Louis Stevenson&#39;s novel Treasure Island (1883), Long John Silver shows young Hawkins his pet parrot in a cage. Silver&#39;s female bird, which ~. . . . . . . he gives sugar snacks and calls Cap&#39; n Flint, not only swears and barks sailing orders but repeatedly shrieks &quot;Pieces of eight!&quot; Silver explains: Now, that bird . .. is, maybe, two hundred years old, Hawkins-they live forever mostly; and if anybody&#39;s seen more wickedness, it must be the devil himself She&#39;s sailed with England, the great Cap&#39;n England, the pirate. She&#39;s been at Madagascar, and at Malabar, and Surinam, and Providence, and Ponobello. She was at the fishing up of the wrecked plate ships. It&#39;s there she learned &quot;Pieces of eight,&quot; and little wonder; three hundred and fifty thousand of &#39; em, Hawkins! She was at the boarding of the Viceroy of the Indies out of Goa, she was; and to look at her you would think she was a babby.

Did sailors really keep parrots on ships at sea? Large brightly-colored birds live mostly in tropical climates, so when the early European explorers began sailing to warm distant shores, they collected parrots as exotic souvenirs and specimens for collectors and scientists back home. In 1676 explorer and pirate William D ampier observed red and yellow &quot;tame Parrots&quot; along the Caribbean coast of Mexico: &quot;They wo uld prate very prettily and there was scarce a Man but what sent aboard one or two of them .&quot; One strategy sailors used for collecting parrots involved seizing one and pinching the animal until it cried out. Since parrots are socially protective birds, others would soon By in to help and get tricked into being caught themselves. Once the sailors h ad the parrots back aboard ship, they built cages to keep the birds safe for the passage home. The animals didn&#39;t always survive their journeys at sea, however. In 1826 on the Atlantic Ocean, the log-keeper of the brig Cicero reported dryly: &#39;&#39;At 9AM took F[ore] T[opgallant] Sail. Lost a parrot overboard bel o nging to Mr Delgado.&quot;