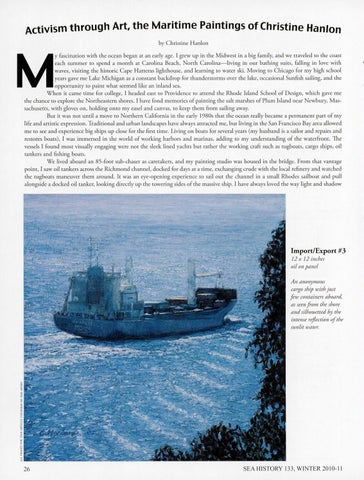 Activism through Art, the Maritim e Paintings of Christine Hanlon by Christine Hanlon y fascination with the ocean began at an early age. I grew up in the Midwest in a big family, and we traveled to the coast each summer to spend a month at Carolina Beach, North Carolina-living in our bathing suits, falling in love with waves, visiting th e historic Cape Hatteras lighthouse, and learning to water ski. Moving to Chicago for my high school years gave me Lake Michigan as a constant backdrop for thunderstorms over the lake, occasional Sunfish sailing, and the opportunity to paint what seemed like an inland sea. When it came time for college, I headed east to Providence to attend the Rhode Island School of Design, which gave me the chance to explore the Northeastern shores. I have fond memories of painting the salt marshes of Plum Island near Newbury, Massachusetts, with gloves on, holding onto my easel and canvas, to kee p them from sailing away. But it was not until a move to Northern California in the early 1980s that the ocean really became a permanent part of my life and artistic expression. Traditional and urban landscapes have always attracted me, but living in the San Francisco Bay area allowed me to see and experience big ships up close for the first time. Living on boats for several years (my husband is a sailor and repairs and restores boats), I was immersed in rhe world of working harbors and marinas, adding to my understanding of the waterfront. The vessels I found most visually engaging were nor the sleek lined yachts bur rather rhe working crafr such as tugboats, cargo ships, oil tankers and fishing boats. We lived aboard an 85-foot sub-chaser as caretakers, and my painring studio was housed in the bridge. From rhar vantage point, I saw oil tankers across the Richmond channel, docked for days at a rime, exchanging crude with the local refinery and watched rhe tugboats maneuver them around. It was an eye-opening experience to sail our the channel in a small Rhodes sailboat and pull alongside a docked oil ranker, looking directly up the towering sides of the massive ship. I have always loved rhe way light and shadow

Import/Export #3 12 x 12 inches oil on panel An anonymous cargo ship with just few containers aboard, as seen from the shore and silhouetted by the intense reflection ofthe sunlit water.