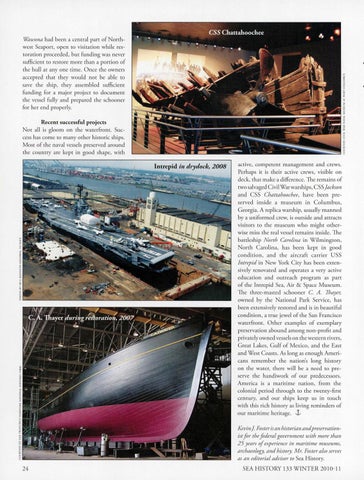 Wawona had been a central part of Northwest Seaport, open to visitation while restoration proceeded, but funding was never sufficient to restore more than a portion of the hull at any one time. Once the owners accepted that they wo uld not be able to save the ship, they assem bled sufficient fundin g for a major project to document the vessel fully and prepared the schooner for her end properly. Recent successful projects Not all is gloom on the waterfront. Success has come to many other historic ships. Most of the naval vessels preserved around the country are kept in good shape, with

active, competent management and crews. Perhaps it is their active crews, visible on deck, that make a difference. The remains of two salvaged C ivil War warships, CSS Jackson and CSS Chattahoochee, have been preserved inside a museum in Columbus , Georgia. A replica wars hip, usually m anned by a uniformed crew, is ou tside and attracts visitors to the museum who might otherwise miss the real vessel remains inside. The battleship North Carolina in Wilmington, North Carolina, has been kept in good co ndition , and the aircraft carrier USS Intrepid in New York City has been extensively renova ted and operates a very active education and outreach program as part of the Intrepid Sea, Air &amp; Space Museum. The three-mas ted schooner C. A . 1hayer, owned by the National Park Service, has been extensively restored and is in beautiful co ndition, a true jewel of the San Francisco waterfro nt. Other examples of exemplary preservation abound among non-profit and privately owned vessels on the western rivers, G reat Lakes, Gulf of Mexico, and the East and W est Coasts. As long as eno ugh Americans remember the nation&#39;s long history on the water, there will be a need ro preserve the handiwork of our predecessors. America is a maritime nation, from the colonial period through to the twenty-first century, and our ships keep us in touch with this rich history as living reminders of our maritime heritage. j:, Kevin j. Foster is an historian andpreservationist for the federa l government with m ore than 25 years of experience in maritime museums, archaeology, and history. Mr. Foster also serves as an edito rial advisor to Sea History.