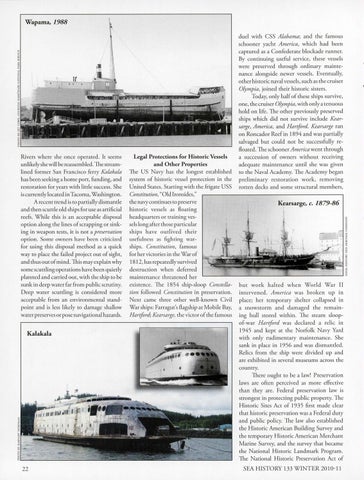 Rivers where she once operated. It seems unlikely she will be reassembled. The streamlined former San Francisco ferry Kalakala has been seeking a home port, funding, and restoration for years with little success. She is currently located in Tacoma, Washington. A recent trend is to partially dis man tie and then scuttle old ships for use as artificial reefs. Whi le this is an acceptable disposal option along the lines of scrapping or sinking in weapon tests, it is not a preservation option. Some owners have been criticized for using this disposal method as a quick way to place the failed project out of sight, and thus out of mind. This may explain why some scuttling operations have been quietly planned and carried out, with the ship to be sunk in deep water far from public scrutiny. Deep water scuttling is considered more acceptable from an environmental standpoint and is less likely to damage shallow water preserves or pose navigational hazards.

Legal Protections for Historic Vessels and Other Properties The US Navy has the longest established system of historic vessel protection in the United States. Starting with the frigate USS Constitution, &quot;Old Ironsides,&quot; the navy continues to preserve historic vessels as floating headquarters or training vessels long after those particular ships have outlived their usefulness as fighting warj ships. Constitution, famous for her victories in the War of 1812, has repeatedly survived destruction when deferred maintenance threatened her existence. The 1854 ship-sloop Constellation followed Constitution in preservation. Next came three other well-known Civil War ships: Farragut&#39;s flagship at Mobile Bay, Hartford; Kearsarge, the victor of the famous

duel with CSS Alabama; and the famous schooner yacht America, which had been captured as a Confederate blockade runner. By continuing useful service, these vessels were preserved through ordinary maintenance alongside newer vessels. Eventually, other historic naval vessels, such as the cruiser Olympia, joined their historic sisters. Today, only half of these ships survive, one, the cruiser Olympia, with only a tenuous hold on life. The other previously preserved ships which did not survive include Kearsarge, America, and H artford. Kearsarge ran on Roncador Reef in 1894 and was partially salvaged but could not be successfully refloated. The schooner America went through a succession of owners without receiving adequate maintenance until she was given to the Naval Academy. The Academy began preliminary resto ration work, removing rotten decks and so me structural m embers,

but work h alted when World War II intervened. America was broken up in place; her temporary shelter collapsed m a snowsto rm and damaged the remaining hull stored within . The steam sloopof-war Hartford was declared a relic in 1945 and kept at the Norfolk Navy Yard with only rudimentary maintenance. She sank in place in 1956 and was dismantled. Relics from the ship were divided up and are exhibited in several museums across the country. There ought to be a law! Preservation laws are often perceived as more effective than they are. Federal preservation law is strongest in protecting public property. The Historic Sites Act of 1935 first made clear that historic preservation was a Federal duty and public policy. The law also established the Historic American Building Survey and the temporary Historic American Merchant Marine Survey, and the survey that became the National Historic Landmark Program. The National Historic Preservation Act of SEA HISTORY 133 WINTER 2010-11