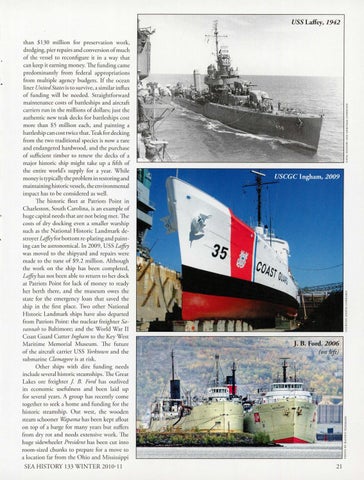 USS Laffey, 1942 than $130 million for preservation wo rk, dredging, pier repairs and conversion of much of the vessel to reconfigure it in a way that can keep it earning money. The fundin g came predominantly from federal appropria tions from multiple agency budgets. If the ocean liner United States is to survive, a similar influx of fundin g will be needed. Straightforward maintenance costs of battleships and aircraft: carriers run in the millions of dollars; just the authentic new teak decks for battleships cost more than $5 million each, and painting a battleship can cost twice that. Teak for decking from the two traditional species is now a rare and endangered hardwood, and the purchase of sufficient timber to renew the decks of a major historic ship m ight take up a fi fth of the entire world's supply for a year. W hile money is typically the problem in restoring and maintaining historic vessels, the environmental impact has to be considered as well. The historic fl eet at Patriots Point in C harleston, South Carolina, is an example of huge capital needs that are not being m et. 1 h e costs of dry docking eve n a smaller warship such as the National Historic Landmark destroye r Laffey for bottom re-plating and painting can be as tronomical. In 2009, USS Laffey was moved to the shipyard and repairs were made to the tune of $9 .2 million. Al tho ugh the work on th e ship has been completed, Laffey has not been able to return to her dock at Patriots Point for lack of mo ney to ready her berth th ere, and the museum owes the state for the emergency loan that saved the ship in the first place. Two o ther Na tional Historic Landm ark ships have also departed fro m Patriots Point: the nuclear fre ighter Savannah to Baltimore; and the World War II Coast G uard C utter Ingham to th e Key Wes t Maritime Mem orial Museum. The fu ture of the aircraft carrier USS Yorktown and the sub ma rine Clamagore is at risk. O ther ships with dire fund ing needs include several historic steamships. The Great Lakes ore freighter j. B. Ford has outlived its economic usefuln ess and been laid up fo r several years. A gro up has recently com e toge ther to seek a hom e and fu nding for the historic steamship. O ut wes t, the wooden steam schoo ner Wapama has been kept afloat on to p of a barge fo r m any years but suffe rs fro m dry ro t and needs extensive wo rk. The huge sidewheeler President has been cu t into roo m-sized chunks to prepare for a move to a location fa r fro m the O hio and Mississippi SEA HISTORY 133 W INTER 20 10-1 1

10 War of 1812: Understudied, Misunderstood, Forgotten, by William H. White • 14 Echoes of World War I, Chemical Warfare Materials on the A...

10 War of 1812: Understudied, Misunderstood, Forgotten, by William H. White • 14 Echoes of World War I, Chemical Warfare Materials on the A...