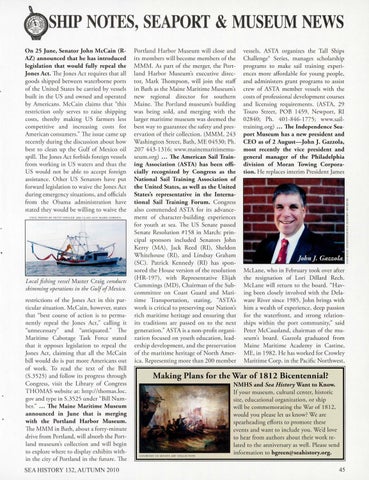 SIDP NOTES, SEAPORT &amp; MUSEUM NEWS On 25 June, Senator John McCain (RAZ) announced that he has introduced legislation that would fully repeal the Jones Act. The Jones Act requires that all goods shipped between waterborne ports of the United States be carried by vessels built in the US and owned and operated by Am ericans. McCain claims that &quot;this res triction only serves ro raise shipping costs, thereby m aking US farmers less competitive and increasing cos ts for Am erican consumers.&quot; The issue cam e up recently during rhe discussion about how best ro clean up the G ulf of Mexico oil spill. The Jones Act forbids foreign vessels from working in US waters and thus the U S wo uld nor be able ro accept fo reign assistance . O ther US Senators h ave put forward legislation to waive rhe Jones Act during emergen cy situatio ns, and officials from rhe O bam a administrati o n have stated they would be willing to waive the USC G PH OTO BY P ETIY OF FICE R J RD CLASS ANN MARI E GORDEN.

M cl ane, who in February took over after the resignation of Lori Dillard Rech. M cl ane will return ro rhe board . &quot;H aving been closely involved with the Delaware River since 1985, John brings with him a wealth of experience, deep passion fo r the waterfro nt, and strong relationships within the port community,&quot; said Peter McCausland, chai rman of the museum&#39;s board . Gazzola graduated from M aine M aritime Academy in Castine, M E, in 1982. He has wo rked fo r C rowley Maritime C orp. in the Pacific No rthwes t,

Making Plans for the War of 1812 Bicentennial? NMHS and Sea History Want to Know. If your museum , cultural center, historic

site, educational organization, or ship will be commemorating the War of 1812, would you please let us know? We are spearheading efforts to promote these events and want to include you. We&#39;d love to hear from authors about their work related to the anniversary as well . Please send information to bgreen@seahistory.org.