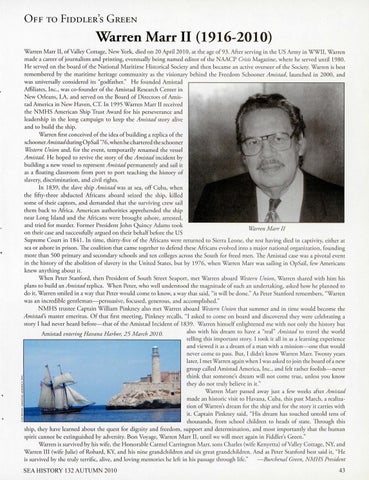 Warren Marr II (1916-2010) Warren Marr II, ofValley Cottage, New York, died on 20 April 2010, at the age of93. After serving in the US Army in WWII, Warren made a career of journalism and printing, eventually being named editor of the NAACP Crisis Magazine, where he served until 1980. He served on the board of the National Maritime Historical Society and then became an active overseer of the Society. Warren is best remembered by the maritime heritage community as the visionary behind the Freedom Schooner Amistad, launched in 2000, and was universally considered its &quot;godfather.&quot; He founded Amistad Affiliates, Inc., was co-founder of the Amistad Research Center in New Orleans, LA, and served on the Board of Directors of Amistad America in New Haven, CT. In 1995 Warren Marr II received the NMH S American Ship Trust Award for his perseverance and leadership in the long campaign to keep the Amistad story alive and to build the ship. Warren first conceived of the idea of building a replica of the schoonerAmistadduring OpSail &#39;76, when he chartered the schooner Western Union and, for the event, temporarily renamed the vessel Amistad. He hoped to revive the story of the Amistad incident by building a new vessel to represent Amistad permanently and sail it as a Boating classroom from port to port teaching the history of slavery, discrimination, and civil rights. In 1839, the slave ship Amistad was at sea, off Cuba, when the fifty-three abducted Africans aboard seized the ship, killed some of their captors, and demanded that the surviving crew sail them back to Africa. American authorities apprehended the ship near Long Island and the Africans were brought ashore, arrested, and tried for murder. Former President John Q uincy Adams took wtlrren Marr II on their case and successfully argued on their behalf before the US Supreme Court in 1841. In time, thirty-five of the Africans were returned to Sierra Leone, the rest having died in captivity, either at sea or ashore in prison. The coalition that came together to defend these Africans evolved into a major national organization, founding more than 500 primary and secondary schools and ten colleges across the South for freed men. The Amistad case was a pivotal event in the history of the abolition of slavery in the United States, but by 1976, when Warren Marr was sailing in OpSail, few Americans knew anything about it. When Peter Stanford, then President of South Street Seaport, met Warren aboard Western Union, Warren shared with him his plans to build an Amistad replica. When Peter, who well understood the magnitude of such an undertaking, asked how he planned to do it, Warren smiled in a way that Peter would come to know, a way that said, &quot;it will be done.&quot; As Peter Stanford remembers, &quot;Warren was an incredible gentleman-persuasive, foc used, generous, and accomplished.&quot; NMHS trustee Captain William Pinkney also met Warren aboard Western Union that summer and in time would become the Amistad&#39;s master emeritus. Of that first meeting, Pinkney recalls, &quot;I asked to come on board and discovered they were celebrating a story I had never heard before-that of the Amistad Incident of 1839. Warren himself enlightened me with not only the history but also with his dream to have a &quot;real&quot; Amistad to travel the world Amistad entering Havana Harbor, 25 March 2010. celling chis important story. I took it all in as a learning experience and viewed it as a dream of a man with a mission-one chat wo uld never come to pass. But, I didn&#39;t know Warren Marr. Twenty years later, I met Warren again when I was asked to join the board of a new group called Amis tad America, Inc., and felt rather foolish-never think that someone&#39;s dream will not come true, unless you know they do not truly believe in it.&quot; Warren Marr passed away just a few weeks after Amistad made an historic visit to Havana, Cuba, this past March, a realization of Warren&#39;s dream for the ship and for the story it carries with it. Captain Pinkney said, &quot;His dream has touched untold tens of thousands, from school children to heads of state. Through this ship, they have learned about the quest for dignity and freedom, support and determination, and most importantly that the human spirit cannot be extinguished by adversity. Bon Voyage, Warren Marr II, until we will meet again in Fiddler&#39;s Green.&quot; Warren is survived by his wife, the Honorable Carmel Carrington Marr, sons Charles (wife Kenyetta) ofValley Cottage, NY, and Warren III (wife Julie) of Ro bard, KY, and his nine grandchildren and six great grandchildren. And as Peter Stanford best said it, &quot;He is survived by the truly terrific, alive, and loving m emories he left in his passage through life.&quot; -Burchenal Green, NMHS President