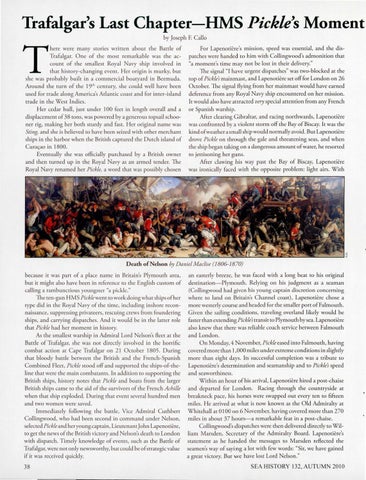 here were many stories written about the Barde of Trafalgar. One of the most remarkable was the account of the smallest Royal Navy ship involved in that history-changing event. Her origin is murky, bur she was probably built in a commercial boatyard in Bermuda. Around the turn of the 19'h century, she could well have been used for trade along America's Atlantic coast and for inter- island trade in the West Indies. H er cedar hull, just under 100 feet in length overall and a displacement of38 tons, was powered by a generous topsail schooner rig, making her both sturdy and fast. Her original name was Sting, and she is believed to have been seized with other merchant ships in the harbor when rhe British captured the Durch island of C urac;:ao in 1800. Eventually she was officially purchased by a British owner and then turned up in the Royal Navy as an armed render. The Royal Navy renamed her Pickle, a word that was possibly chosen

For Lapenoriere's mission, speed was essential, and rhe dispatches were handed to him with Collingwood's admonition rhar "a moment's rime may not be lost in their delivery." The signal "I have urgent dispatches" was two-blocked at the top of Pickle's mainmast, and Lapenotiere set off for London on 26 October. The signal flying from her mainmast would have earned deference from any Royal Navy ship encountered on her mission. Ir would also have attracted very special attention from any French or Spanish warship. After clearing Gibraltar, and racing northwards, Lapenotiere was confronted by a violent storm off the Bay of Biscay. Ir was the kind ofweather a small ship would normally avoid. Bur Lapenoriere drove Pickle on through the gale and threatening seas, and when rhe ship began raking on a dangerous amount of water, he resorted to jettisoning her guns. Afrer clawing his way past the Bay of Biscay, Lapenoriere was ironically faced with the opposite problem: light airs. With

Death of Nelson by Daniel Madise (1806-1870) because it was part of a place name in Britain's Plymouth area, but ir mighr also have been in reference to rhe English custom of calling a rambunctious youngster "a pickle." The ren-gun HMS Pickle went to work doing what ships of her type did in rhe Royal Navy of the time, including inshore reconnaissance, suppressing privateers, rescuing crews from founderi ng ships, and carrying dispatches. And it would be in the latter role rhar Pickle had her moment in history. As the smallest warship in Admiral Lord Nelson's fleet at the Barde of Trafalgar, she was not directly involved in the horrific combat action ar Cape Trafalgar on 21 October 1805. During char bloody barde between rhe British and rhe French-Spanish Combined Fleet, Pickle stood off and supported the ships-of-rheline rhat were the main combatants. In addition to supporting rhe British ships, history notes that Pickle and boars from the larger British ships came to the aid of the survivors of the French Achille when rhar ship exploded. During char event several hundred men and two women were saved. Immediately fo llowing the barde, Vice Admiral Cuthbert Collingwood, who had been second in command under Nelson, selected Pickleand her young captain, Lieu tenant John Lapenotiere, to get the news of the British victory and Nelson's death to London with dispatch. Timely knowledge of events, such as rhe Barde of Trafalgar, were not only newsworthy, bur could be ofstrategic value if it was received quickly. 38

an easterly breeze, he was faced with a long bear to his original destination-Plymouth. Relying on his judgment as a seaman (Collingwood had given his yo ung captain discretion concerning where to land on Britain's C hannel coast), Lapenotiere chose a more westerly course and headed for rhe smaller port of Falmouth. Given rhe sailing conditions, traveling overland likely would be fasrerrhan exrendingPicklehransir to Plymouth by sea. Lapenoriere also knew that there was reliable coach service between Falmouth and London. On Monday, 4 November, Pickle eased into Falmouth, having covered more than 1,000 miles under extreme conditions ins lighdy more rhan eight days. Its successful completion was a tribute to Lapenoriere's determination and seamanship and to Pickle's speed and seaworthiness. Within an hour of his arrival, Lapenotiere hired a post-chaise and departed for London. Racing through the countryside at breakneck pace, his horses were swapped our every ten to fifteen miles. He arrived at what is now known as the O ld Admiralty ar Whitehall at 0100 on 6 November, having covered more than 270 miles in abour 37 hours-a remarkable feat in a post-chaise. Collingwood's dispatches were then delivered directly to William Marsden, Secretary of the Admiralty Board. Lapenoriere's statement as he handed rhe messages to Marsden reflected rhe seamen's way of saying a lot with few words: "Sir, we have gained a great victory. Bur we h ave lost Lord Nelson." SEA HISTORY 132, AUTUMN2010