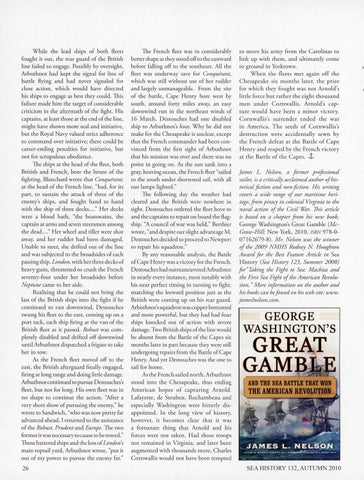 While the lead ships of both fleets fought it our, the rear guard of the British line failed to engage. Possibly by oversight, Arbuthnot had kept the signal for line of battle flying and had never signaled for close action, which would have directed his ships to engage as best they could. This fa ilure made him the target of considerable criticism in the aftermath of the fight. His captains, at least those at the end of the line, might have shown more zeal and initiative, but the Royal Navy valued strict adherence to command over initiative; there could be career-ending penalties for initiative, but not for scrupulous obedience. The ships at the head of the fleet, both British and French, bore the brunt of the fightin g. Blanchard wro te that Conquerant, at the head of the French line, &quot;had, for its part, to sustain the attack of three of the enemy&#39;s ships, and fought hand to hand with the ship of three decks ... .&quot; Her decks were a blood bath, &quot;the boatswains, the captain at arms and seven steersmen among the dead .. .. &quot; Her wheel and tiller were shot away, and her rudder had been damaged. Unable to steer, she drifted out of the line and was subjected to the broadsides of each passing ship. London, with her three decks of heavy guns, threatened to crush the French seventy-four under her broadsides before Neptune came to her aide. Realizing that he could not bring the last of the British ships into the fight if he contin ued to run downwind, Desrouches swung his fleet to the east, coming up on a port tack, each ship firing at the van of the British fl eet as it passed. Robust was completely disabled and drifted off downwind until Arbuthnot dispatched a fri gate to take her in tow. As the French fleet moved off to the east, the British afterguard finally engaged, firing at long range and doing little damage. Arbuthnot continued to pursue D estouches&#39;s fleet, but not for long. His own fleet was in no shape to continue the action. &#39;&#39;After a very short show of pursuing the enemy,&quot; he wrote to Sandwich, &quot;who was now pretty far advanced ahead, I returned to the assistance of the Robust, Prudent and Europe. The two former it was necessary to cause to be rowed.&quot; Those battered ships and the loss ofLondon&#39;s main topsail yard, Arb uthnot wrote, &quot;put it out of my power to pursue the enemy far. &quot; 26

The French fl eet was in considerably better shape as they stood off to the eastward before falling off to the southeast. All the fl eet was underway save for Conquerant, which was still without use of her rudder and largely unmanageable. From the site of the battle, Cape Henry bore west by south, around forty miles away, an easy downwind run in the northeast winds of 16 March. Desrouches had one disabled ship to Arbuthnot&#39;s four. Why he did not make for the Chesapeake is unclear, except that the French commander had been convinced from the first sight of Arbuthnot that his mission was over and there was no point in going on . As the sun sank into a gray, heaving ocean, the French fleet &quot;sailed to the south under shortened sail, with all our lamps lighted.&quot; The following day the weather had cleared and the British were nowhere in sight. Desrouches ordered the fleet hove to and the captains to repair on board the flagship. &quot;A council of war was held,&quot; Berthier wrote, &quot;and despite our slight advantage M. Destouches decided to proceed to Newport to repair his squadron.&quot; By any reasonable analysis, the Battle of Cape Henry was a victory for the French. Destouches had outmaneuvered Arbuthno t in nearly every instance, most notably with his near perfect timing in turning to fight, snatching the leeward position just as the British were coming up on his rear guard. Arbuthnor&#39;s squadron was copper bottomed and more powerful, but they had had four ships knocked out of action with severe damage. Two British ships of the line would be absent from the Battle of the Capes six months later in part because they were still undergoing repairs from the Bartle of Cape H enry. And yet Desrouches was the one to sail for home. As the French sailed north, Arbuthnot stood into the C hesapeake, thus ending American hopes of capturing Arnold. Lafayette, de Steuben, Rochambeau and especially Washington we re bitterly disappointed. In the long view of history, however, it becomes clear that it was a fortunate thing that Arnold and his forces were not taken. Had those troops not remained in Virginia, and later been augmented with tho usands more, Charles Cornwallis wo uld not have been tempted

to move his army from the Carolinas to link up with them , and ultimately come to gro und in Yorktown. When the flee ts met again off the C hesapeake six months later, the prize for which they fought was not Arnold&#39;s little force but rather the eigh t thousand m en under Cornwallis. Arno ld&#39;s capture would h ave been a minor victory. Cornwallis&#39;s surrender ended the war in America. The seeds of Cornwallis&#39;s des truction were accidentally sewn by the French defeat at the Bartle of Cape Henry and reaped by the French victory at the Battle of the Capes . ,!, James L. Nelson, a former professional sailor, is a critically acclaimed author ofhistorical fiction and non-fiction. His writing covers a wide range of our maritime heritage, from piracy in colonial Virginia to the naval action of the Civil Wtir. lhis article is based on a chapter from his new book, George Washington&#39;s Great Gamble (McGraw-Hill: N ew York, 20 10, ISBN 978-007162679-8). Mr. Nelson was the winner of the 2 009 NMHS Rodney N. Houghton Award for the Best Feature Article in Sea History (Sea H istory 123, Summer 2 008) for &quot;Taking the Fight to Sea: Machias and the First Sea Fight of the American Revolution.&quot; More information on the author and his books can be found on his web site: www. jameslnelson. com.