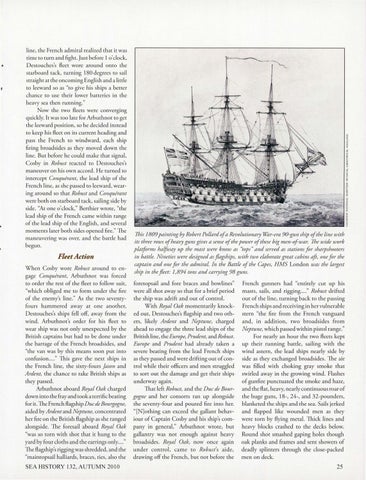 1his 18 09 painting by Robert Pollard ofa Revolutionary war-era 9 0-gun ship of the line with its three rows ofheavy guns gives a sense ofthe power ofthese big men-of war. 1he wide work platforms halfway up the mast were know as "tops" and served as stations far sharpshooters in battle. Nineties were designed as flagships, with two elaborate great cabins aft, one far the captain and one far the admiral. In the Battle of the Capes, H MS London was the largest ship in the fleet: 1,894 tons and carrying 98 guns.

fo retopsail and fore braces and bowlines" were all shor away so rhar for a brief period rhe ship was adrift and our of control. Wirh Royal Oak momentarily knocked our, Desrouches's flagship and rwo ochers, likely Ardent and Neptune, charged ahead to engage rhe rhree lead ships of rhe Brirish line, rhe Europe, Prudent, and Robust. Europe and Prudent had al ready raken a severe bearing from rhe lead French shi ps as rhey passed and were drifring our of co nrrol while rheir offi cers and men srruggled to son our rhe damage and ger rheir shipsunderway again. That left Robust, and rhe Due de Bourgogne and her consorts ran up alongside rhe sevenry-fo ur and poured fire imo her. "[N]othing can exceed rhe gallant behaviour of Captain Cosby and his ship's company in general," Arbuthnor wrore, bur gallantry was nor enough agai nst heavy broadsides. Royal Oak, now once agai n under control, came ro Robust's aide, drawing off rhe French, but nor before the

French gunners had "emirely cut up his masts, sails, and rigging.. .. " Robust d rifted our of the line, turning back to rhe pass ing French ships and receiving in her vulnerabl e stern "the fi re from the French vanguard and, in addirion, rwo broadsides from Neptune, which passed within pistol range." For nearly an hour rhe rwo fl eers kepr up their running barde, sailing with the wind astern, the lead ships nearly side by side as they exchanged broadsides. The air was filled wirh choking gray smoke that swirled away in rhe growing wind. Flashes of gunfire puncruated the smoke and haze, and the Aar, heavy, nearly continuous roar of the huge guns, 18-, 24-, and 32-pounders, blanketed the ships and the sea. Sails jerked and fl apped like wo unded men as rhey were torn by flying meral. Thick lines and heavy blocks crashed to rhe decks below. Round shot smashed gaping holes though oak planks and frames and sent showers of deadly splinters th ro ugh the cl ose-packed men on deck.