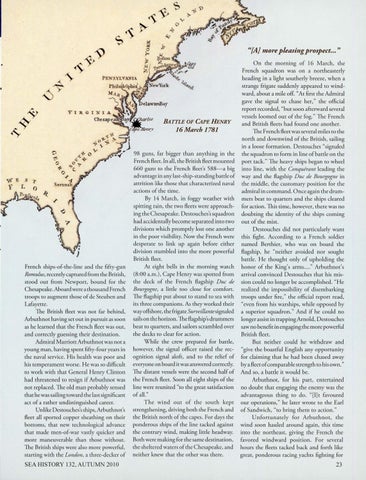 Romulus, recently captured from the British, stood out from Newport, bound for the Chesapeake. Aboard were a thousand French troops to augment those of de Steuben and Lafayette. The British fleet was not far behind, Arbuthnot having set out in pursuit as soon as he learned that the French fleet was out, and correctly guessing their destination. Admiral MarriottArbuthnotwas not a young man, having spent fifty-four years in the naval service. His health was poor and his temperament worse. He was so difficult to work with that General Henry Clinton had threatened to resign if Arbuthnot was not replaced. The old man probably sensed that he was sailing toward the last significant act of a rather undistinguished career. Unlike Destouches&#39;s ships, Arbuthnot&#39;s fleet all sported copper sheathing on their bottoms, that new technological advance that made men-of-war vastly quicker and more maneuverable than those without. The British ships were also more powerful, starting with the London, a three-decker of

On the morning of 16 March, the French squadron was on a northeasterly heading in a light southerly breeze, when a strange frigate suddenly appeared to windward, about a mile off. &quot;At first the Admiral gave the signal to chase her,&quot; the official report recorded, &quot;but soon afterward several vessels loomed out of the fog.&quot; The French BATTLE OF CAPE HENRY and British fleets had found one another. 16March 1781 The French fleet was several miles to the north and downwind of the British, sailing in a loose formation . Destouches &quot;signaled 98 guns, far bigger than anything in the the squadron to form in line of battle on the French fleet. In all, the British fleet mounted port rack.&quot; The heavy ships began to wheel 660 guns to the French fleet&#39;s 588-a big into line, with the Conquerant leading the advantage in any last-ship-standing battle of way and the flagship Due de Bourgogn.e in attrition like those that characterized naval the middle, the customary position for the actions of the time. admiral in command. Once again the drumBy 14 March, in foggy weather with mers beat to quarters and the ships cleared spirring rain, the two fleets were approach- for action. This time, however, there was no ing the Chesapeake. Destouches&#39;s squadron doubting the identity of the ships coming had accidentally become separated into two out of the mist. divisions which promptly lost one another Destouches did not particularly want in the poor visibility. Now the French were this fight. According to a French soldier desperate to link up again before either named Berthier, who was on board the division stumbled into the more powerful flagship, he &quot;neither avoided nor sought British fleet. battle. He thought only of upholding the At eight bells in the morning watch honor of the King&#39;s arms .... &quot; Arbuthnot&#39; s (8:00 a.m.), Cape Henry was spotted from arrival convinced Destouches that his misthe deck of the French flagship Due de sion could no longer be accomplished. &quot;He Bourgogn.e, a little too close for comfort. realized the impossibility of disembarking The flagship put about to stand to sea with troops under fire,&quot; the official report read, its three companions. As they worked their &quot;even from his warships, while opposed by way offshore, the frigate SurveiLLante signaled a superior squadron .&quot; And if he could no sails on the horizon. The flagship&#39;s drummers longer assist in trappingArnold, Destouches beat to quarters, and sailors scrambled over saw no benefit in engaging the more powerful the decks to clear for action. British fleet. While the crew prepared for battle, Bur neither could he withdraw and however, the signal officer raised the rec- &quot;give the boastful English any opportunity ognition signal aloft, and to the relief of for claiming that he had been chased away everyone on board it was answered correctly. by a fleet of com parable strength to his own.&quot; The distant vessels were the second half of And so, a battle it would be. the French fleet. Soon all eight ships of the Arbuthnot, for his part, entertained line were reunited &quot;to the great satisfaction no doubt that engaging the enemy was the of all.&quot; advantageous thing to do. &quot;[l]t favoured The wind out of the south kept our operations,&quot; he later wrote to the Earl strengthening, driving both the French and of Sandwich, &quot;to bring them to action.&quot; the British north of the capes. For days the Unfortunately for Arbuthnot, the ponderous ships of the line tacked against wind soon hauled around again, this time the contrary wind, making little headway. into the northeast, giving the French the Both were making for the same destination, favored windward position. For several the sheltered waters of the Chesapeake, and hours the fleets tacked back and forth like neither knew that the other was there. great, ponderous racing yachts fighting for