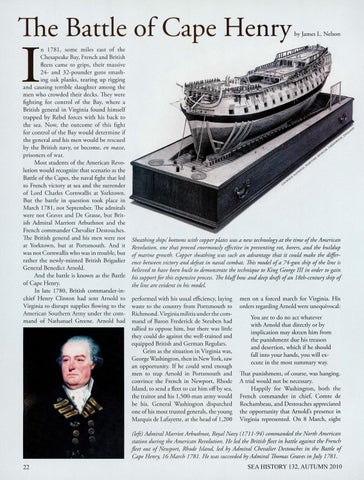 The Battle of Cape Henry byJ,m~LNdwn n 1781, some miles east of the Chesapeake Bay, French and British fleets came to grips, their massive 24- and 32-pounder guns smashing oak planks, tearing up rigging and causing terrible slaughter among the men who crowded their decks. They were fighting for control of the Bay, where a British general in Virginia found himself trapped by Rebel forces with his back to the sea. Now, the outcome of this fight for control of the Bay would determine if the general and his men would be rescued by the British navy, or become, en masse, prisoners of war. Most students of the American Revolution would recognize that scenario as the Battle of the Capes, the naval fight that led to French victory at sea and the surrender of Lord Charles Cornwallis at Yorktown. But the battle in question took place in March 1781, not September. The admirals were not Graves and De Grasse, but British Admiral Marriott Arbuthnot and the French commander Chevalier Destouches. The British general and his men were not at Yorktown, but at Portsmouth. And it was not Cornwallis who was in trouble, but rather the newly-minted British Brigadier General Benedict Arnold. And the battle is known as the Battle of Cape Henry. In late 1780, British commander-inchief Henry Clinton had sent Arnold to Virginia to disrupt supplies flowing to the American Southern Army under the command of Nathanael Greene. Arnold had

Sheathing ships&#39; bottoms with copper plates was a new technology at the time ofthe American Revolution, one that proved enormously effective in preventing rot, borers, and the buildup of marine growth. Copper sheathing was such an advantage that it could make the difference between victory and defeat in naval combat. This model of a 74-gun ship of the line is believed to have been built to demonstrate the technique to King George III in order to gain his support for this expensive process. The bluff bow and deep draft ofan I 8th-century ship of the line are evident in his model.

performed with his usual efficiency, laying waste to the country from Portsmouth to Richmond. Virginia militia under the command of Baron Frederick de Steuben had rallied to oppose him, but there was little they could do against the well-trained and equipped British and German Regulars. Grim as the situation in Virginia was, George Washington, then in New York, saw an opportunity. If he could send enough men to trap Arnold in Portsmouth and convince the French in Newport, Rhode Island, to send a fleet to cut him off by sea, the traitor and his 1,500-man army would be his. General Washington dispatched one of his most trusted generals, the yo ung Marquis de Lafayette, at the head of 1,200

men on a forced march for Virginia. His orders regarding Arnold were unequivocal: You are to do no act whatever with Arnold that directly or by implication may skreen him from the punishment due his treason and desertion, which if he should fall into your hands, you will execute in the most summary way. That punishment, of course, was hanging. A trial would not be necessary. Happily for Washington, both the French commander in chief, Comte de Rochambeau, and Destouches appreciated the opportunity that Arnold&#39;s presence in Virginia represented. On 8 March, eight

(left) Admiral Marriot Arbuthnot, Royal Navy (1711-94) commanded the North American station during the American Revolution. He led the British fleet in battle against the French fleet out of Newport, Rhode Island, led by Admiral Chevalier Destouches in the Battle of Cape Henry, 16 March 1781. He was succeeded by Admiral Thomas Graves in July 1781.