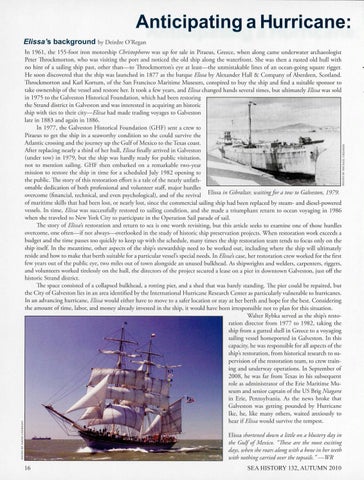 In 1961 , the 155-foot iron motorship Christophoros was up fo r sale in Piraeus, Greece, when along cam e underwater archaeologist Peter Throckmorton , who was visiting the port and noticed the old ship along the waterfro nt. She was then a rusted old hull with no hint of a sailing ship past, o ther than-to Throckmorton's eye at least- the unmistakable lin es of an ocean-going square rigger. H e soon discovered that the ship was launched in 1877 as the barque Elissa by Alexander Hall & Company of Aberdeen, Scotland. Throckmorton and Karl Kortum, of the San Francisco Maritime Museum, conspired to buy the ship and find a suitable sponsor to take ownership of the vessel and restore her. It took a few years, and Elissa changed hands several times, but ultimately Elissa was sold in 1975 to the Galveston Historical Foundation, which had been restoring the Strand district in Galveston and was interested in acquiring an historic ship with ties to their city-Elissa had m ade trading voyages to Galveston late in 1883 and again in 1886. In 1977, the Galveston Historical Foundation (GH F) sent a crew to Piraeus to get the ship in a seaworthy condition so she could survive the Atlantic crossing and the journey up the G ulf of Mexico to the Texas coast. After replacing nearly a third of her hull, Elissa fin ally arrived in Galveston (under tow) in 1979, bur the ship was hardly ready for public visitation, ~ not to mention sailing. G HF then embarked on a remarkable two-year u :; mission to restore the ship in time for a scheduled July 1982 opening to ~ 5 the public. The story of this restoration effort is a tale of the nearly unfath"""'=--=-----' ~ omable dedication of both professional and volunteer staff, major hurdles 'al h · al d h 1 · 1) d f h · I Elissa in Gibraltar, waiting/or a tow to Galveston, 1979. overcome (fi nanc1 , tee me , an even psyc o og1ca , an o t e rev1va of maritime skills that had been lost, or nearly lost, since the commercial sailing ship had been replaced by steam- and diesel-powered vessels. In time, Elissa was successfully restored to sailing condition , and she made a triumphant return to ocean voyaging in 1986 when she traveled to N ew York City to participate in the Operation Sail parade of sail. The story of Elissa's restoration and return to sea is one worth revisiting, but this article seeks to examine one of those hurdles overcome, one often-if not always- overlooked in the study of historic ship preservation projects. When restoration work exceeds a budget and the time passes too quickly to keep up with the schedule, many times the ship restoration team tends to focus only on the ship itself. In the meantime, other aspects of the ship's stewardship need to be worked our, including where the ship will ultimately reside and how to make that berth suitable for a particular vessel's special needs. In Elissa's case, her restoration crew worked for the first few years out of the public eye, two miles out of town alongside an unused bulkhead. As shipwrights and welders, carpenters, riggers, and volunteers worked tirelessly on the hull, the directors of the proj ect secured a lease on a pier in downtown Galveston , just off the historic Strand district. The space consisted of a collapsed bulkhead, a rotting pi er, and a shed that was barely standing. The pier could be repaired, but the City of Galveston lies in an area identified by the International Hurricane Research Center as particularly vulnerable to hurricanes. In an advancing hurricane, Elissa wo uld either have to move to a safer location or stay at her berth and hope for the best. Considering the amount of time, labor, and money already invested in the ship, it wo uld have been irresponsible not to plan for this situation. Walter Rybka served as the ship's restoration director from 1977 to 1982, taking the ship from a gutted shell in Greece to a voyaging sailing vessel homeported in Galveston. In this capacity, he was responsi ble for all aspects of the ship's resto ration, from historical research to supervision of the restoration team , to crew training and underway operations. In September of 2008, he was far from Texas in his subsequent role as administrator of the Erie Maritime Museum and senior captain of the US Brig Niagara in Erie, Pennsylvania. As the news broke that Galveston was getting pounded by Hurricane Ike, he, like many others, waited anxiously to hear if Elissa wo uld survive the tempest. Elissa shortened down a little on a blustery day in

the Gulf of Mexico. "These are the most exciting days, when she roars along with a bone in her teeth with nothing carried over the topsails. " - WR 16