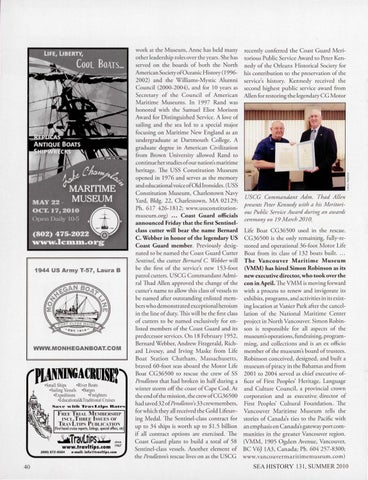 wo rk at the M useum, An ne has held many other leadership roles over the years. She has served on the boards of bo th the N orth American Society ofO ceanic History ( 19962002) and the Williams-Mys tic Alumni C ouncil (2000-2004) , and for 10 years as Secretary of the Council of America n M aritime Museums. In 1997 Rand was honored with the Samuel Eliot Morison Award for Distinguished Service. A love of sailing and the sea led to a special major foc using on M aritime New England as an undergraduate at D artmouth College. A graduate degree in American Civilization fro m Brown University allowed Rand to continue her studies of our nation&#39;s maritime heritage. The U SS Constitution Museum opened in 1976 and serves as the memory and educational voice of Old Ironsides. (USS Constitution Museum, Charles town N avy Yard, Bldg. 22, Charles town, MA 021 29; Ph. 61 7 426-1 8 12; www.ussconstitutionmuseum.org) .. . Coast Guard officials announced Friday that the first Sentinelclass cutter will bear the name Bernard C. Webber in honor of the legendary US Coast Guard member. Previously designated to be nam ed the Coast G uard C utter Sentinel, the cutter Bernard C. Webber will be the first of the service&#39;s new 153-foor patrol cutters. USCG Commandant Admiral Thad Allen approved the change of the cutter&#39;s name to allow this class of vessels to be named after outstanding enlisted members who demonstrated exceptional heroism in the line of duty. This w ill be the first class of cutters to be nam ed exclusively for enlisted members of the Coast Guard and its predecessor services. On 18 February 1952, Bernard Webber, And rew Fitzgerald, Richard Livesey, and Irving Maske from Life Boat Station C hatham , Massachusetts, braved 60-foo t seas aboard the Motor Life Boat CG36500 to rescue the crew of SS Pendleton that had broken in half during a winter storm off the coast of Cape C od . Ar the end of the mission , the crew ofCG 36500 had saved 32 ofPendleton&#39;s 33 crewmembers, for which they all received the Gold Lifesaving Medal . The Sentinel-class contract for up to 34 ships is wo rth up to $ 1.5 billion if all contract options are exercised. The Coas t G uard plans to build a total of 58 Sentinel-class vessels. Another element of the Pendleton&#39;s rescue lives on as the USCG

USCG Commandant Adm. Thad A ffen presents Peter Kennedy with a his Meritorious Public Service Award during an awards ceremony on 19 March 2 010. Life Boat C G36500 used in the rescue. CG36500 is the only remaini1ig, fu lly-restored and operational 36-foot M otor Life Boat from its class of 132 boats built. . .. The Vancouver Maritime Museum (VMM) has hired Simon Robinson as its new executive director, who took over the con in April. The V M M is moving fo rward with a process to renew and invigorate its exhibits, program s, and activities in its existing location at Vani er Park after the cancellation of th e National M aritime Center project in No rth Vancouver. Simon Robinson is responsible for all aspects of the museum&#39;s operations, fundraising, programming, and collectio ns and is an ex offi cio m ember of the museum&#39;s board of trustees. Robinson conceived , designed, and built a museum of piracy in the Baham as and from 2001 to 2004 served as chief executive officer of First Peoples&#39; H eritage, Language and Cultu re Co uncil, a provincial crown corpo ration and as executive direcror of First Peoples&#39; Cultural Foun dation . The Vanco uver M aritime Museum tells the stories of Canada&#39;s ties ro the Pacific with an emphasis on Can ada&#39;s gateway port communities in the greater Vancouver region . (VM M , 1905 O gd en Avenue, Vancouver, BC V6J 1A3, Can ad a; Ph. 604 25 7-8 300; www.va nco uve rm a ritimemuse um. com) SEA HISTORY 131 , SUMMER 2010