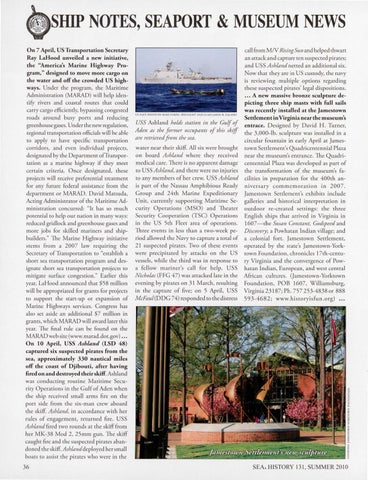 USS As hland holds station in the Gulf of Aden as the former occupants of this skiff are retrieved from the sea. wa ter near their skiff All six we re brought o n board Ashland where they received medical ca re. There is n o apparent damage to USS Ashland, and there were no injuries to any m embers of her crew. USS Ashland is part of rhe Nassau Amphibi ous Ready G roup and 24 th M arine Expeditio nary Unit, currently supporting M aritime Secu ri ty Operatio ns (MS O ) and Theater Securi ty Cooperation (TSC) O perations in the US 5th Fleet area of operations. Three events in less than a two-week period allowed the Navy to capture a to tal of 2 1 suspected pirates. Two of these events were precipitated by attacks on the US vessels, while rhe third was in response to a fellow mariner&#39;s call for h elp. U SS Nicholas (FFG 47) was an acked late in the evening by pirates o n 31 March, resulting in the capture of five; on 5 April, USS McFaul (DD G 7 4) responded to the distress