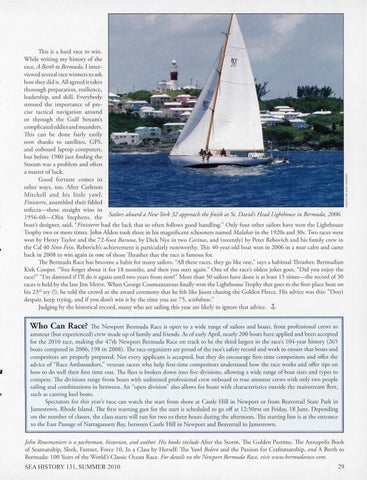 This is a hard race to win. While writing my history of the race, A Berth to Bermuda, I interviewed several race winners to ask how they did it. All agreed it rakes thorough preparation, resilience, leadership, and skill. Everybody stressed the importance of precise tactical navigation around or through the Gulf Stream&#39;s complicated eddies and meanders. This can be done fairly easily now thanks to satellites, GPS, and onboard laptop comp uters, bur before 1980 just finding rhe Stream was a problem and often a matter of luck. Good fortune comes in other ways, too. After Carleton Mitchell a nd hi s littl e yawl, Finisterre, assembled their fabled trifecra-three straight wins in l 956-60-0lin Stephens, th e

Sailors aboard a New York 32 approach the finish at St. David&#39;s H ead Lighthouse in Bermuda, 2006

boat&#39;s designer, said, &quot;Finisterre h ad the luck that so often fo llows good handling.&quot; Only four other sailors have won the Lighthouse Trophy two or more rimes. John Alden rook three in his magnificent schooners named Malabar in the 1920s and 30s. Two races were won by Henry Taylor and the 72-foor Baruna, by Dick Nye in two Carinas, and (recently) by Peter Rebovich and his family crew in the Cal 40 Sinn Fein. Rebovich&#39;s ach ievement is particularly noteworthy. TI1is 40-year-old boar won in 2006 in a near calm and came back in 2008 to win again in one of those Thrashes that the race is famous for. The Bermuda Race has become a habit for many sailors. &quot;All these races, they go like one,&quot; says a habitual Thrasher, Bermudian Kirk Cooper. &quot;You forger about it for 18 months, and then yo u start agai n .&quot; One of the race&#39;s oldest jokes goes, &quot;Did yo u enjoy the race?&quot; &#39;Tm damned if I&#39;ll do it again until two years from now! &quot; More than 50 sailors have done it at least 15 times- the record of30 races is held by the late Jim Mertz. When George Coumantarous finall y won the Lighthouse Trophy that goes to the first-place boat on his 23&#39;d try(!), he told the crowd at the award ceremony that he felt like Jaso n chasing the Golden Fleece. His advice was this: &quot;Don&#39;t despair, keep trying, and if you don&#39;t win it by the time yo u are 75, withdraw.&quot; Judging by the historical record, many who are sai ling this year are likely to ignore that advice. ,!,

The Newport Bermuda Race is open to a wide range of sailors and boars, from professional crews to amateur (bur experienced) crew made up of family and friends. As of early April, nearly 200 boars have applied and been accepted for the 2010 race, making the 47th Newport Bermuda Race on track to be rhe third largest in the race&#39;s 104-year history (265 boars competed in 2006; 198 in 2008). The race organizers are proud of the race&#39;s safety record and work to ensure that boats and competitors are properly prepared . Nor every applicant is accepted, but they do encourage first-time competitors and offer the advice of &quot;Race Ambassadors,&quot; veteran racers who help first-rime competitors under; rand how the race works and offer rips on how to do well their first rime out. The fleer is broken down into five divisions, allowing a wide range of boar sizes and types ro compete. The divisions range from boats with unlimited professional crew onboard to true amateur crews with only two people sailing and combinations in between. An &quot;open division&quot; also allows for boars with characteristics outside the mainstream fleet, such as canting keel boars. Spectators for this year&#39;s race can watch the start from shore at Castle Hill in Newport or from Beavertail State Park in Jamestown, Rhode Island. The first warning gun for the start is scheduled to go off at 12:50PM on Friday, 18 June. Depending on the number of classes, the class starts will run for two to three ho urs during the afternoon. The starri ng line is at the entrance to the East Passage of Narragansett Bay, between Castle Hill in Newport and Beaverrail in Jamestown.

john Rousmaniere is a yachtsman, historian, and author. His books include After the Storm, The Golden Pastim e, The Annapolis Book of Seamansh ip, Sleek, Fastnet, Force 10, In a Class by Herself: The Yawl Bolero and the Passion for Craftsmanship, and A Berth to Bermuda: 100 Years of the World&#39;s Classic Ocean Race. For details on the Newport Bermuda Race, visit www.bermudarace.com.