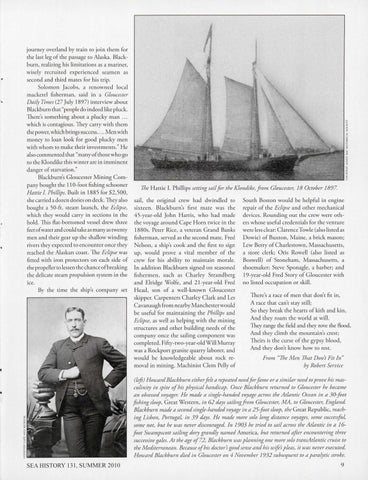 journey overland by train to join them for the last leg of the passage to Alaska. Blackburn, realizing his limitatio ns as a mariner, wisely recrui red experienced seamen as second and third mates for his trip. Solomo n Jacobs, a renowned local mackerel fisherm an, said in a Gloucester Daily Times (27 July 1897) interview about Blackburn that &quot;people do indeed like pluck. There&#39;s something about a plucky m an . . . which is contagious. They carry with them the power, which brings success .... M en with m oney to loan look for good plucky men with whom to make their investments.&quot; He also commented that &quot;many of those who go to the Klondike this winter are in imminent danger of starvation .&quot; Blackburn&#39;s Glo ucester Mining C ompany bought the 110-foot fishing schooner Hattie I Phillips. Built in 1885 for $2, 500, she carried a dozen dories on deck. They also bought a 50-fr. steam launch , the Eclipse, which they wo uld carry in sections in the hold. This fiat-bottomed vessel drew three feet ofwater and could take as many as twenty men and their gear up the shallow winding rivers they expected to encounter once they reached the Alaskan coast. The Eclipse was fitted with iron protectors on each side of the propeller to lessen the chance of breaking the delicate steam propulsion system in the ice. By the time the ship&#39;s company set

The H attie I. Phillips setting sail far the Klondike, from Gloucester, 18 October 1897. sail, th e ori ginal crew had dwindled to sixteen . Blackb urn&#39;s first m ate was the 45-year-old John H arris, who had m ade the voyage aro und Cape H orn twice in the 188 0s. Peter Rice, a ve teran Grand Banks fisherman, served as the second m ate. Fred N elson, a ship&#39;s cook and the first to sign up, wo uld prove a vital member of the crew for his abili ty ro maintain morale. In addition Blackburn signed on seasoned fish ermen, such as Charley Strandberg and Elridge Wolfe, and 2 1-year-old Fred H ead, son of a well-known G louces ter skipper. Carpenters C harley Clark and Les Cavanaugh from nearby Manchester wo uld be useful fo r maintaining the Phillips and Eclipse, as well as helping with the mining structures and o ther building needs of the company once the sailing compo nent was completed. Fifty-two-year-old W ill M urray was a Rockport granite quarry laborer, and would be knowledgeable about rock removal in mining. Machinist Clem Pelly of

South Boston would be helpful in engine repair of the Eclipse and other mechanical devices. Rounding out the crew were others whose useful credentials for the venture we re less clear: Clarence Towle (also listed as D owie) of Buxton, M aine, a brick mason; Lew Berry of C harlestown, Massachusetts, a store clerk; Otis Rowell (also listed as Boswell) of Stoneham, M assachusetts, a shoem aker; Steve Sponagle, a barber; and 19-year-old Fred Story of Glouces ter w ith no listed occupation or skill. There&#39;s a race of men that don&#39;t fit in, A race that can&#39;t stay still; So they break the hearts of kith and kin, And they roam the world at w ill. They range the field and they rove the flood, And they climb the mountain&#39;s crest; Theirs is the curse of the gypsy blood, And they don&#39;t know how to rest.

From &quot;The Men That Don&#39;t Fit In&quot; by Robert Service

(left) Howard Blackburn either felt a repeated needfar Jame or a similar need toprove his masculinity in spite of his physical handicap. Once Blackburn returned to Gloucester he became an obsessed voyager. He made a single-handed voyage across the A tlantic Ocean in a 3 0-faot fishing sloop, Great Western, in 62 days sailing.from Gloucester, A1A., to Gloucester, England. Blackburn made a second single-handed voyage in a 25-faot sloop, the G reat Republic, reaching Lisbon, Portugal in 39 days. He made more solo long distance voyages, some successfal some not, but he was never discouraged. In 19 03 he tried to sail across the Atlantic in a 16faot Swampscott sailing dory grandly named America, but returned after encountering three successive gales. At the age of72, Blackburn was planning one more solo transAtlantic cruise to the Mediterranean. Because ofhis doctor&#39;s good sense and his wife&#39;s pleas, it was never executed. Howard Blackburn died in Gloucester on 4 November 1932 subsequent to a paralytic stroke. SE A HISTORY 131 , SUMMER 2010