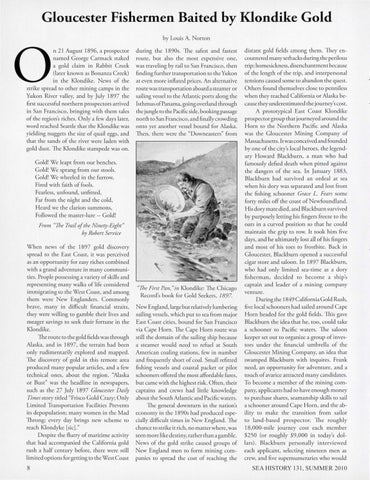 Gloucester Fishermen Baited by Klondike Gold by Lo uis A. No rton n 2 1 August1 896, a pros pector named Geo rge Carmack sraked a gold claim in Rabbit C reek (later known as Bonanza C reek) in the Klondike. News of the strike spread to other mining camps in the Yukon River valley, and by July 1897 the first successful northern prospecto rs arrived in San Francisco, bringing wirh rhem rales of the region&#39;s riches. Only a few days later, wo rd reached Seattle rhar rhe Klondike was yielding nuggers the size of quail eggs, and that the sands of the river were laden with gold dust. The Klondike stampede was on .

during the 1890s. The safest and fas test roure, bur also the m os t expensive one, was traveling by rail to San Francisco, rhen findin g further transportation to the Yukon at even more infl ated pri ces. An alternative route was transpo rtation aboard a steamer or sailing vessel to the Atlantic ports along rhe Isthmus of Panama, going overland through the jungle to the Paci ficside, booking passage north to San Francisco, and finally crowding onto ye t another vessel bound for Al as ka. Then, rhere were the &quot;Downeasters&quot; from

Gold! We leapt from our benches. Gold! We sprang from our stools. Gold! W e wheeled in rhe furrow, Fired with fa ith of fo ols. Fearless, unfound, unfitted, Far from the night and the cold, H eard we the clarion summons, Followed the mas ter-lure -- Gold!

From &quot;The Trail ofthe Ninety-Eight&quot; by Robert Service When news of the 1897 gold discovery spread to the East Coasr, it was perceived as an oppo rtuni ty fo r easy riches combined with a grand adventure in many communities. People possessing a variety of skills and representing many walks of life considered immi grating ro the Wes t Coas t, and among them were New Englanders. Commonly brave, many in difficult financial straits, they were willing to gamble their lives and meager savings to seek their fortun e in the Kl o ndike. 1 h e ro ute to the gold fields was through Alas ka, and in 1897, rhe terrain had been only rudimentarily explored and mapped . The discovery of gold in this remo te area produced many popular articles, and a few technical ones, about the region . &#39;&#39;Alaska or Bust&quot; was the headline in newspapers, such as the 27 July 1897 Gloucester Daily Times story tided &quot;Frisco Gold C razy; Only Limi ted Transportation Faciliri es Prevents irs depopulation; many women in th e M ad Thro ng; every day brings new scheme to reach Klondyke (sic).&quot; D espite the flurry of maritime activity that had accompanied the Califo rni a gold rush a half century before, there were still limi red options for getting to the Wes t Coas t

&quot;The First Pan,&quot; in Klo ndike: The C hicago Record&#39;s book for Gold Seekers, 1897. New England, large bu t relatively Iumbering sailing vessels, which put to sea from major East Coasr cities, bound fo r San Francisco via Cape Horn. The Cape H orn ro ute was still the domain of the sailing ship because a steamer wo uld need to refu el at South Ame rican coaling statio ns, few in number and frequently short of coal. Small refined fishing vessels and coasral packet or pilot schooners offered the most affo rdable fa res, but came with the highes t risk. Often, their captains and crews had little knowledge abour the Sourh Atlanti c and Pacific waters. The general downturn in rhe nation&#39;s economy in the 1890s had produced especially difficult times in New England. The chance to strike it rich , no m atrer where, was seen m ore like destiny, rather than a gamble. News of rhe gold strike caused gro ups of New England men to for m mining companies to spread rhe cost of reaching the

distant gold fields among them. They encounrered many setbacks during rhe peri lous trip; hom es ickness, disenchantment because of the length of the trip, and interpersonal tensions caused some to abandon the quest. O thers fo und them selves close to penniless when they reached California or Alas ka because they underestimated the journey&#39;s cost. A prototypical East Coast Kl o nd ike prospecto r gro up rhat journeyed around rhe H o rn to the N orthern Pacific and Alaska was rhe Gloucester Mining Co mpany of M assachusetts. It was conceived and founded by one of the city&#39;s local heroes, the legendary H oward Blackburn, a man who had fam ously defied dearh when pitted aga in st rhe dangers of the sea. In January 1883 , Blackburn had survived an ordeal at sea when his dory was separated and lost fro m rhe fishing schooner Grace L. Fears so me fo rty miles off the coas t of N ewfo undland. His do ry mate died, and Blackburn survived by purposely letting his fin gers freeze to the oars in a curved position so that he co uld m aintain the grip to row. It took him five days, and he ultimately lost all of hi s fin gers and most of his toes to frostbite. Back in G loucester, Blackburn opened a successful cigar store and saloon. In 1897 Blackburn , who had o nly limited sea-time as a dory fis h erman, decid ed to becom e a shi p&#39;s captain and leader of a minin g co mpany venrure. During the 1849 C alifornia Gold Rush, five local schooners had sailed around Cape Horn headed for the gold field s. This gave Blackburn the idea that he, too, could take a schooner to Pacifi c wa ters. 1he saloon keeper set out to o rganize a group of invesrors under the fi nancial umbrella of the Glo ucester M ining Company, an idea that swamped Blackburn wirh inquires . Frank need, an oppo rtuni ty fo r adventure, and a touch of ava rice attracted many candidates. To become a m ember of the mining company, appli cants had to have enough m oney to purchase shares, seamanship skills to sail a schooner around Cape Horn, and rhe abili ty to m ake the transition from sailor to land-based prospector. The rough ly 18,000-mile jo urney cost each m ember $25 0 (or ro ughl y $9,000 in today&#39;s dolla rs) . Blackburn personally interviewed each applicant, selecting nineteen m en as crew, and fi ve supernumeraries who would SEA HISTORY 131 , SUMMER2010