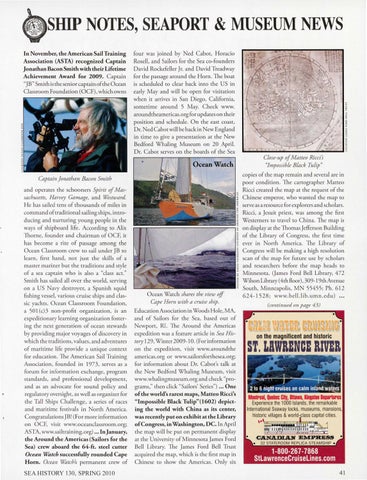 four was joined by Ned Cabot, Horacio Rosell, and Sailors fo r the Sea co-founders D avid Rockefeller Jr. and D avid Treadway for the passage around the Horn . The boat is scheduled to clear back into the US in early M ay and will be open fo r visitation when it arrives in San Diego, California, sometime around 5 May. C heck www. aroundtheamericas.org for updates on their position and schedule. On the east coast, Dr. Ned Cabot will be back in New England in time to give a presentation at the New Bedford Whaling Museum on 20 April. Dr. Cabot serves on the boards of the Sea Close-up of M atteo Ricci&#39;s &quot;Impossible Black Tulip&quot;

and operates the schooners Spirit of M assachusetts, Harvey Gamage, and Westward. H e has sailed tens of thousands of miles in command oftraditional sailing ships, introducing and nurturing young people in the ways of shipboard life. According to Alix Tho rne, fo under and chairman of O C F, it has beco me a rite of passage am o ng the Ocean C lass roo m crew to sail under JB to learn, fi rs t han d, not just the skills of a mas ter mariner but the traditio ns and sryle of a sea captain who is also a &quot;class act.&quot; Smith has sailed all over the wo rld, serving on a US Navy destroyer, a Spanish squid fishing vessel, va rious cruise ships and classic yachts. O cean Class room Foundatio n, a 501 (c)3 non-profit organization, is an expeditio nary learning organization fostering the next generation of ocean stewards by providing majo r voyages of discovery in which the trad itio ns, values, and adventures of m aritime life provide a unique context fo r educatio n. The American Sail Training Associatio n, fo unded in 1973, serves as a fo rum fo r inform atio n exchange, program standards, and professional development, and as an advocate for sound policy and regulatory oversight, as well as organizer for the Tall Ships C hallen ge, a series of races and m aritime fes tivals in No rth Am erica. Congratulations JB! (Fo r more information on O CF, visit www. oceanclassroom.org; ASTA, www.sailtrai ning.o rg) ... lnJanuary, the Around the Americas (Sailors for the Sea) crew aboard the 64-ft. steel cutter Ocean Wtitch successfully rounded Cape Horn. Ocean watch&#39;.s permanent crew of SEA HISTORY 130, SPRING 2010

Ocean Watch shares the view off Cape Horn with a cruise ship. Education Association in Woods H ole, MA, and of Sailors for the Sea, based out of Newport, Rl. The Around th e Americas expedition was a fea ture article in Sea H istory 129, Winter 2009-10 . (For information o n the expedition, visit www.aroundthe ameri cas.org o r www.sailorsfo rthesea.org; fo r informatio n about Dr. Cabot&#39;s talk at the New Bedford Whaling Museum , visit www.whalingmuseum.org and check &quot;programs,&quot; then click &quot;Sailors&#39; Series&quot;) ... One of the world&#39;s rarest maps, Matteo Ricci&#39;s &quot;Impossible Black Tulip&quot;(1602) depicting the world with China as its center, was recently put on exhibit at the Library of Congress, in Washington, DC. In April the map will be put on permanent display at the Universiry of Minnesota Jam es Ford Bell Library. The James Ford Bell Trust acquired the map, which is the first map in Chinese to show the Americas . Only six

copies of the map remain and several are in poor condition. The cartographer M atteo Ricci created the m ap at the request of the C hinese emperor, who wanted the m ap to serve as a resource for explorers and scholars. Ricci, a Jesuit pries t, was among the first Westerners to travel to China. The map is on display at the Thomas Jefferson Building of the Library of Co ngress, the first time ever in No rth America. The Library of Congress will be maki ng a high resolution scan of the map fo r future use by scholars and researchers before the map heads to Minnesota. (Jam es Ford Bell Library, 472 Wilson Library (4th floor), 309-19thAvenue South, Minneapolis, M N 554 55; Ph. 6 12 62 4- 15 28 ; www. bell.lib.umn .e du) (continued on page 43)