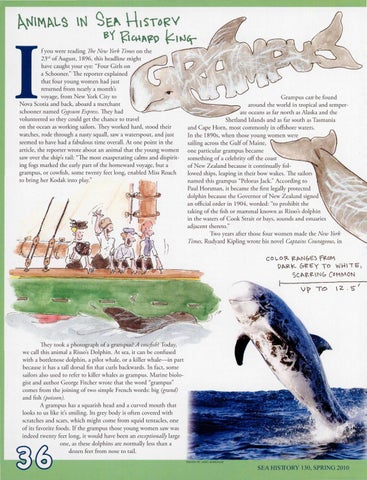 G rampus can be found aro und the wo rld in tropical and remperare oceans as far north as Alaska and rhe Shedand Islands and as far south as Tasmania and Cape Horn , most commonly in offshore waters. In the 1890s, when those yo ung women were; sailing across the Gulf of Maine, one parti cular grampus became something of a celebriry off the coasr of New Zealand because it co ntinually fo llowed ships, leaping in rheir bow wakes. The sailors named this grampus &quot;Pelorus Jack.&quot; According co Paul H orsman, it became the first legally protected dolphin because rhe Governor of New Zealand signed an official order in 1904, worded: &quot;co prohibit the raking of rhe fish or mammal known as Risso&#39;s dolphin in rhe warers of Cook Srrair or bays, so unds and esrnaries adjacent thereto.&quot; Two years after chose four women made the New York Times, Rudyard Kipling wrote his novel Captains Courageous, in

They rook a phocograph of a grampus?ÂˇA cow.fish? Today, we call this animal a Risso&#39;s Dolphin. Ar sea, it can be confused with a borrlenose dolphin, a pilot whale, or a killer whale-in part because it has a tall dorsal fin that curls backwards. In fact, some sailors also used co refer co killer whales as grampus. Marine biologist and author George Fircher wrote char rhe word &quot;grampus&quot; comes from the joining of rwo simple French wo rds: big (grand) and fi sh (poisson). A grampus has a squarish head and a curved mouth char looks co us like it&#39;s smiling. Its grey body is often covered with scratches and scars, which might come from squid tentacles, one of its favo rite foods. If the grampus those yo ung wo men saw was indeed rwenry feet long, it wo uld have been an exceptionally large one, as these dolphins are normally less than a ~ dozen feet from nose co rail.