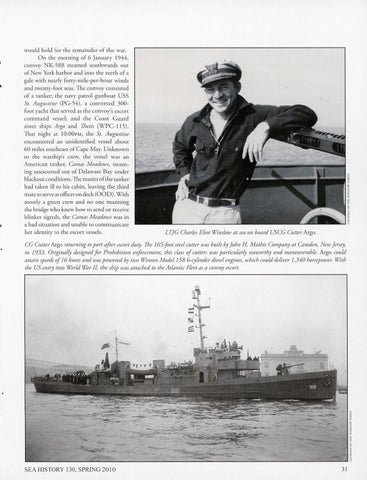 would hold fo r the remainder of the war. On the morning of 6 Janua ry 1944, convoy N K-588 steamed southward s out of New York harbor and into the teeth of a gale with nearly for ty-mile-per-hour winds and twenty-foot seas. The convoy consisted of a tanker; the navy patrol gunboat USS St. Augustine (PG -54), a converted 300foot yacht that served as the convoy&#39;s escort command vessel; and the C oas t G uard sister ships A rgo and Thetis (WPC -115). That night at 1O:OOrM, the St. Augustine encountered an unidentified vessel abo ut 60 miles southeas t of Cape M ay. U nknown to the warship&#39;s crew, the vessel w as an American tanker, Camas M eadows, steam ing unescorted out of Delaware Bay under blackout conditions . The master of th e tanker had taken ill to his cabin, leaving the third mate to serve as officer on deck (OOD) . With mostly a green crew and no one m anning the bridge who knew how to send o r receive blinker signals, the Camas M eadows was in a bad situation and unable to communicate her identity to the escort vessels.

CG Cutter Argo returning to p ort after escort duty. The 165-foot steel cutter was built by j ohn H M athis Company at Camden, New j ersey, in 1933. Originally designed for Prohibition enforcement, this class of cutters was particularly seaworthy and maneuverable. Argo could attain speeds of 16 knots and was powered by two Winton M odel 158 6-cylinder diesel engines, which could deliver 1,340 horsep ower. With the US entry into Wo rld Wtz r IL the ship was attached to the Atlantic Fleet as a convoy escort.