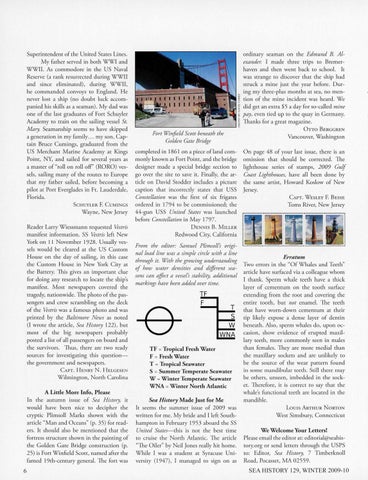 Superintendent of the United States Lines. My father served in bo th WWI and WWII. As commodore in the US Naval Reserve (a rank resurrected during WWII and since eliminated), during WWII, he commanded co nvoys to England. He never lost a ship (no doubt luck accompanied his skills as a seaman). My dad was one of the last graduates of Fort Schuyler Academy to train on the sailing vessel St. Mary. Seamanship seems to have skipped a generation in my family ... my son, Captain Bruce Cumings, graduated from the US Merchant Marine Academy at Kings Point, NY, and sailed for several years as a master of &quot;roll on roll off&quot; (RORO) vessels, sailing m any of the routes to Europe that my father sailed, before becoming a pilot at Port Everglades in Ft. Lauderdale, Florida. SCHUYLER F. CUMI NGS Wayne, New Jersey Reader Larry Wiessmann requested Vestris manifest information. SS Vestris left New York on 11 November 1928. Usually vessels would be cleared at the US C ustom House on the day of sailing, in this case the Custom House in New York City at the Battery. This gives an important clue for doing any research to locate the ship&#39;s manifest. Most newspapers covered the tragedy, nationwide. The photo of the passengers and crew scrambling on the deck of the Vestris was a famous photo and was printed by the Baltimore News as noted (I wrote the article, Sea H istory 122), but most of the big newspapers probably posted a list of all passengers on board and the survivors. Thus, there are two ready sources for investigating this questionthe government and newspapers. CAPT. HENRY N. HELGESEN

Wilmington, North Carolina A Little More Info, Please In the autumn issue of Sea History, it would have been nice to decipher the cryptic Plimsoll Marks shown with the article &quot;Man and Oceans&quot; (p. 35) for readers. It should also be m entioned that the fortress structure shown in the painting of the Golden Gate Bridge constructio n (p. 25) is Fort Winfield Sco tt, named after the famed 19th-century general . The fort was

ordinary seaman on the Edmund B. Alexander. I made three trips to Bremerhaven and then went back to school. It was strange to discover that the ship had struck a mine just the year befo re. During my three-plus months at sea, no mention of the mine incident was heard. W e did get an extra $5 a day for so-called mine pay, even tied up to the quay in Germany. Thanks for a great magazine. OTTO B ERGGREN

Fort Winfield Scott beneath the Golden Gate Bridge completed in 1861 on a piece ofland commonly known as Fort Point, and the bridge designer made a special bridge section to go over the site to save it. Finally, the article o n David Stodder includes a picture caption that incorrectly states that USS Constellation was the first of six frigates ordered in 1794 to be commissioned; the 44-gun USS United States was launched before Constellation in May 1797. D ENNIS B. MILLER

Vancouver, Washington On page 48 of yo ur last issue, there is an omission that should be corrected. The lighthouse series of stamps, 2009 Gulf Coast Lighthouses, have all been done by the same artist, Howard Koslow of New Jersey. CAPT. W ESLEY F. B ESSE Toms River, New Jersey r

From the editor: Samuel Plimsolls origi- [__,,_,,,,.&#39;&quot; ·-···.,.~&#39;°-~&#39;&#39;&#39;· · -· · · &#39;&quot;&quot;·&quot;·&quot;&#39;&#39;···&quot; ·· &quot;~&quot;&#39;&quot;,&#39; · ·C··&quot;&#39;&#39;~&#39;&#39;&#39;&#39;&quot;&quot;··~ nal load line was a simple circle with a line Erratum through it. With the growing understanding Two errors in the &quot;Of Whales and Teeth&#39;&#39; of how water densities and different seaarticle have surfaced via a colleague whom sons can affect a vessel&#39;s stability, additional I thank. Sperm whale teeth have a thick markings have been added over time. layer of cementum on the tooth surface extending from the root and covering the entire tooth, but not enamel. The teeth that have worn-down cementum at their tip likely expose a dense layer of dentin beneath. Also, sperm whales do, upon occasion, show evidence of erupted m axillary teeth , more commonly seen in males than females. They are more m edial than TF = Tropical Fresh Water the maxillary sockets and are unl ikely to F = Fresh Water be the source of the wear pattern found T = Tropical Seawater in some mandibular teeth. Still there may S = Summer Temperate Seawater be others, unseen, imbedded in the sockW = Winter Temperate Seawater et. Therefore, it is correct to say that the WNA = Winter North Atlantic whale&#39;s functional teeth are located in the mandible. Sea History Made Just for Me Lams ARTHUR NORTON It seems the summer issue of 2009 was West Simsbury, Connecticut written for me. My bride and I left Southhampton in February 1953 aboard the SS We Welcome Your Letters! United States- this is no t the best tim e to cruise the North Atlantic. The article Please email the editor at: editorial @seahis&quot;The O iler&quot; by Neil Jones really hit home. tory.org or send letters through the USPS While I was a student at Syracuse Uni- to: Editor, Sea History, 7 Timberknoll versity (1947), I managed to sign on as Road, Pocasset, MA 02559 .