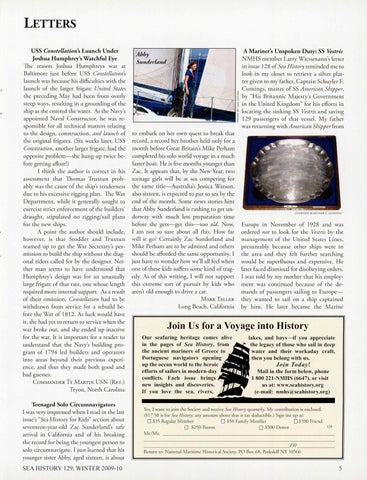 LETTERS USS Constellation&#39;s Launch Under Joshua Humphrey&#39;s Watchful Eye The reason Joshua Humphreys was at Baltimore just before USS Constellation&#39;s launch was because his difficulties with the launch of the larger frigate United States the preceding May had been from overly steep ways, resulting in a gro unding of the ship as she entered the water. As the Navy&#39;s appointed Naval Construcror, he was responsi ble for all technical matters relating ro the design , construction, and launch of the original frigates. (Six weeks later, USS Constitution, another larger frigate, had the opposite problem-she hung up twice before getting afloat! ) I think the author is co rrect in his assessm ent that Thomas Truxtun probably was the cause of the ship&#39;s tenderness due to his excess ive ri gging plan. The War Department, whi le it ge nerally so ught to exercise strict enforcement of the builders&#39; draught, stipulated no ri gging/sail plans for the new ships. A point the author should include, howeve r, is that Stodder a nd T ruxtun team ed up to get the War Secretary&#39;s permiss io n to build the ship without the diagonal riders called for by the designer. Neither man seems to have understood that Humphrey&#39;s design was for an unusually large fri gate of that rate, one whose length required more internal support. As a result of their omission, Constellation had to be withdrawn from service for a rebui ld before the War of 181 2. As luck wo uld have it, she had yet to return to service when the war broke out, and she ended up inactive for the war. It is importam for a reader ro understand that rhe Navy&#39;s building program of 1794 led builders and operators into areas beyond their previous experience, and thus they m ade both good and bad guesses. COMMANDER TY MARTIN USN (R.ET.) Tryo n, North Carol ina

Teenaged Solo Circumn avigators I was very impressed when I read in the last issue&#39;s &quot;Sea History for Kids&quot; section about seventeen-yea r-old Zac Sunderland&#39;s safe arrival in California and of his breaking the record for being the yo unges t perso n to solo ci rcumnavigate. I just learned that his yo unger sister Abby, aged sixteen, is abo ut

A Mariner&#39;s Unspoken Duty: SS l-estris NM HS member Larry Wiessmann&#39;s letter in issue 128 of Sea H istory reminded me to look in my closet to retrieve a silver platter given to my fat her, Captain Sch uyler F. C umings , mas ter of SS American Shipper, by &quot;H is Britannic M ajesty&#39;s Government in the United K in gdom&quot; for his efforts in locating the sinking SS Vestris and sav ing 129 passengers of that vessel. M y father was returning with American Shipper from to embark on her own quest to break that record, a record her brother held on ly for a momh before Great Britain&#39;s Mike Perham completed his solo world voyage in a much faster boat. H e is five months yo unger than Zac. Ir appears that, by the New Year, two teenage girls will be at sea competing for the same tide-Australia&#39;s Jessica Warson, also sixteen, is expected to put to sea by the end of the month. Some news sto ries hint that Abby Sunderland is rushing to get underway with much less prepara tion time before she gets-get this-too old. Now, I am not so sure about all this. How far will it go? Certainly Zac Sunderland and Mike Perham are to be admired and others should be afforded the sam e opportunity. I just have to wonder how we&#39;ll all feel when one of these kids suffers some kind of tragedy. As of this writing, I will not support this extreme sort of pursuit by kids who aren&#39;t old enough to drive a car. MARK TELLER Long Beach, California

Europe in November of 1928 a nd was ordered not to look for the Vestris by the management of the United Stares Lines, presumably because other ships were in the area and they felt further sea rching would be superfluous and expensive. H e later faced dismissal fo r d isobeying orders. I was to ld by my mother that his emp loyment was cominued because of the demands of passengers saili ng to Europe they wanted to sail on a sh ip capta ined by him. H e later became rhe M arine

Join Us for a Voyage into History Our seafa rin g heritage comes alive in the pages of Sea Histo1y, from the a ncient ma riners of G reece to Portu guese na viga tors opening up the ocea n world to the heroic efforts of sailors in modern-d ay conflicts. Each issue brin gs new insights and discove ries. If you love the sea, r ivers,

la kes, and bays-if you appreciate the legacy of those who sail in deep wa ter a nd their workaday craft, then yo u belong with us.