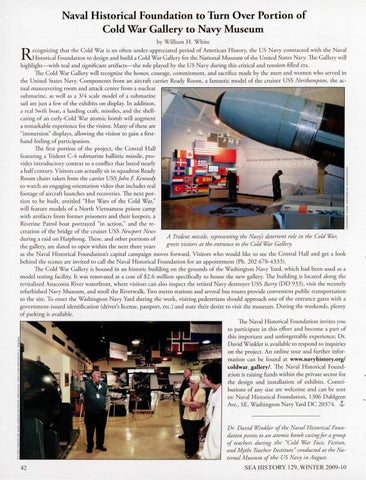 Naval Historical Foundation to Turn Over Portion of Cold War Gallery to Navy Museum by William H. White ecogn izing chat the Cold War is an often under-appreciated period of American History, the US Navy contracted with the Naval Historical Foundation to design and build a Cold War Gal lery for the National Museum of the United States Navy. The Gallery will highlight-with real and significant artifacts-the role played by the US Navy during chis critical and tension-filled era. The Cold War Gallery will recognize the honor, courage, commitment, and sacrifice made by the men and women who served in the United States Navy. Components from an aircraft carrier Ready Room, a fantastic model of the cruiser USS Northampton, the actual maneuvering room and arrack center from a nuclear sub marine, as well as a 3/4 scale model of a submarine sail are just a few of the exhibits on display. In addition, a real Swift boar, a landing craft, missiles, and the shellcasing of an early-Cold War atomic bomb will augment a remarkable experience for the visitor. Many of these are &quot;immersion&quot; displays, allowing the visitor to gain a firsthand feeling of participation. The first portion of the project, the Central Hall featuring a Trident C-4 submarine ballistic missile, provides introducto ry context to a conflict that lasted nearly a half century. Visitors can actually sit in squadron Ready Room chairs taken from the carrier USS john F Kennedy to watch an engaging orientation video chat includes real footage of aircraft launches and recoveries. The next portion to be built, entided &quot;Hot Wars of the Cold War,&quot; will feature models of a North Vietnamese prison camp with artifacts from former prisoners and their keepers, a Riverine Patrol boat portrayed &quot;in action,&quot; and the recreation of the bridge of the cruiser USS Newport News during a raid on Haiphong. These, and other portions of A Trident missile, representing the Navy&#39;s deterrent role in the Cold war, the gallery, are slated to open within the next three years greets visitors at the entrance to the Cold war Gallery.

as the Naval Historical Foundation&#39;s capital campaign moves forward. V isitors who wo uld like to see the Central Hall and gee a look behind the scenes are invited to call the Naval Historical Foundation for an appointment (Ph. 202 678-4333). The Cold War Gallery is housed in an historic building on the grounds of the Washington Navy Yard, which had been used as a model testing faci lity. It was renovated at a cost of $2.6 million specifically to house the new gallery. The building is located along the revitalized Anacostia River waterfront, where visito rs can also inspect the retired Navy destroyer USS Barry (DD 933) , visit the recendy refurbished Navy Museum, and stroll the Riverwalk. Two metro stations and several bus routes provide convenient public transportation to the site. To enter the Washington Navy Yard during the week, visiting pedestrians should approach one of the entrance gates with a government-issued identification (driver&#39;s license, passport, etc.) and state their desire to visit the museum. During the weekends, plenty of parking is available. The Naval Historical Foundation invites yo u to participate in chis effort and become a part of chis important and unforgettable experience; Dr. David W inkler is available to respond to inquiries on the project. An online tour and further information can be found at www.navyhistory.org/ coldwar_gallery/. The Naval Historical Foundation is raising funds within the private sector for the design and installation of exhibits. Contributions of any size are welcome and can be sent co: Naval Historical Foundation, 1306 Dahlgren Ave., SE, Washington Navy Yard DC 20374. j:,

Dr. David Winkler of the Na val Historical Foundation points to an atomic bomb casing/or a group of teachers during the &quot;Cold war Fact, Fiction, and Myths Teacher Institute&quot; conducted at the National Museum of the US Navy in August. 42