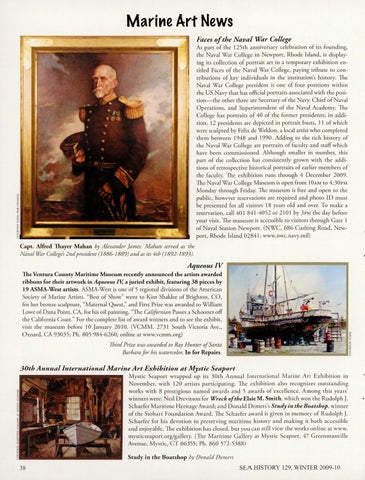 Maritte Art News Faces of the Naval Wtir College As part of the 125th anniversary celebration of its founding, the Naval War College in Newport, Rhode Island, is displaying its collection of portrait art in a temporary exhibition entitled Faces of the Naval War College, paying tribute to contributions of key individuals in the institution&#39;s history. The Naval War College president is one of four positions within the US Navy that has official portraits associated with the position-the other three are Secretary of the Navy, C hief of Naval Operations, and Superintendent of the Naval Academy. The College has portraits of 40 of the former presidents; in addition, 12 presidents are depicted in portrait busts, 11 of which were sculpted by Felix de Weldon, a local artist who completed them between 1948 and 1990. Adding to the rich history of the Naval War College are portraits of faculty and staff which have been commissioned. Although sm aller in number, this part of the co llection has consistently grow n with the additions of retrospective historical portraits of earlier members of the faculty. The exhibition runs through 4 December 2009. The Naval War College M useum is open from IOAM to 4:30PM Monday through Friday. 1he museum is free and open to the public, however reservations are required and photo ID must be presented for all visitors 18 years old and over. To make a reservation, call 401 841-4052 or 210 1 by 3PM the day before yo ur visit. The museum is accessible to visitors through Gate 1 of Naval Station Newpo rt. (NWC, 686 C ushing Road, Newport, Rhode Island 02841; www.nwc. navy.mil) Capt. Alfred Thayer Mahan by Alexander fames. Mahan served as the Naval Wli r Coffege&#39;s 2 nd p resident (1886-1889) and as its 4th (1892-1893).

Aqueous IV The Ventura County Maritime Museum recently announced the artists awarded ribbons for their artwork in Aqueous Iv, a juried exhibit, featuring 38 pieces by 19 ASMA-West artists. ASMA-West is one of 5 regional divisions of the American Society of Marine Artists. &quot;Best of Show&quot; went to Kim Shaklee of Brighton, CO, for her bronze sculpture, &quot;Maternal Quest,&quot; and First Prize was awarded to William Lowe of Dana Point, CA, for his oil painting, &quot;The Californian Passes a Schooner off the California Coast.&quot; For the complete list of award winners and to see the exh ibit, visit the museum before 10 January 2010. (VCMM, 2731 South Victoria Ave., Oxnard, CA 93035; Ph. 805 984-6260; online at www.vcmm.org) Third Prize was awarded to Ray Hunter of Santa Barbara for his watercolor, In for Repairs.

30th Annual International Marine Art Exhibition at Mystic Seaport Mystic Seaport w rapped up its 30th Annual International Marine Arr Exhibition in November, with 120 artists participating. The exhibition also recognizes outstanding works w ith 8 prestigious named awards a nd 5 awards of excellence. Among this years&#39; winners were: Neil Drevitson for Wreck ofthe Elsie M. Smith, which won the Rudolph J. Schaefer Mar itime Heritage Award; and Donald Demers&#39;s Study in the Boatshop, win ner of the Stobart Foundation Award. The Schaefer awa rd is given in memory of Rudolph J. Schaefer for his devotion to preserving maritime history and making it both accessible and enjoyable. The exhibition has closed, but yo u can still view the works online at www. mysticseaporr.org/gallery. (The Maritime Gallery at Mystic Seapo rr, 47 Greenma nville Ave nue, Mystic, CT 06355; Ph. 860 572-5388) Study in the Boatshop by Donald D emers