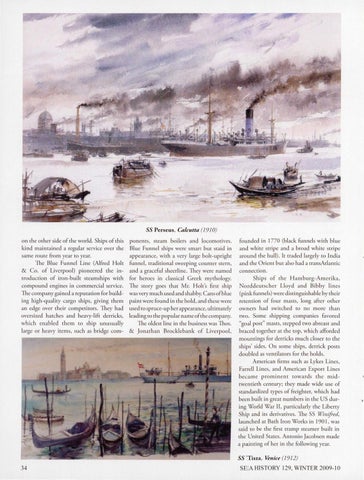 SS Perseus, Calcutta (1910) on the other side of the world. Ships of this kind maintained a regular service over the same route from year to yea r. The Blue Funnel Line (Alfred Holt &amp; Co. of Liverpool) pioneered the introduction of iron-built steamships with compound engines in commercial service. The company gained a reputation for building high-quality cargo ships, giving them an edge over their competitors. They had oversized hatches and heavy- lift derri cks, which enabl ed them to ship unusually large or heavy items, such as bridge com-

ponents, steam boilers and locomotives. Blue Funnel ships were smart but staid in appearance, wi th a very large bolt-upright funnel, traditional sweep ing counter stern, and a graceful sheerline. They were named for heroes in classical Greek mythology. The story goes that Mr. H olt&#39;s first ship was very much used and shabby. Cans ofblue paint were found in the hold, and these were used to spruce-up her appearance, ultimately leading to the popular nam e of the company. The oldest line in the business was Thos. &amp; Jonathan Brocklebank of Liverpool,

founded in 1770 (black funnels with blue and white stripe and a broad white stripe around the hull). It traded largely to India and the Orient but also had a rransAtlamic connection. Ships of the H a mburg-Am erika, No rddeutscher Lloyd and Bibby lines (pink funnels) we re distinguishable by their retention of fo ur masts, long after oth er owners had switched to no more than two. Some shipping companies favored &quot;goal post&quot; masts, stepped two abreast and braced together at the top, which afforded mountings fo r derricks much closer to the ships&#39; sides. On so me ships, derrick posts doubled as ventilato rs for the holds. American firms such as Lykes Lines, Farrell Lines, and Am erican Export Lines becam e p rominent towards th e midtwentieth century; they made wide use of standardized types of freighter, which had been built in great numbers in the US during World War II, particularly the Liberty Ship and its deriva ti ves. The SS Winifred, launched at Bath Iron Works in 1901, was said to be the first tramp steamer built in the United States. Antonio Jacobsen made a patinting of her in the fo llowing year.