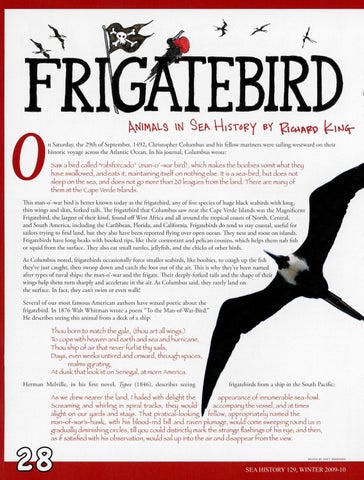 n Saturday, the 29th of September, 1492, Christopher Columbus and his fellow mariners were sailing westward on their histori c voyage across the Atlantic Ocean. In his journal, Columbus wrote:

Saw a bird ca lled &quot;ra bifo rcado &quot; (ma n-o &#39; - wa r bird) , which ma kes the boo bies vomit what the!:J have swa llowed , a nd eats it, ma inta ining itself o n nothing else. It is a sea-bird, but d oes not s leep o n the sea, a nd does not go mo re t ha n 20 leagues f rom the la nd . The re a re ma n!:! of the m at the Ca pe Verde is la nds. This man-o&#39; -war bird is better known today as the frigatebird, any of fi ve species of huge black seabirds with lo ng, thin wings and slim, forked tails. The frigatebird that Columbus saw near the Cape Verde Islands was the Magn ificent Frigatebird, the larges t of their kind, fo und off West Africa and all around the tropical coasts of No rth , Central, and South America, including the Caribbean, Florida, and Californ ia. Frigatebirds do tend to stay coastal , useful for sai lors trying to find land, but they also have been reported flying over open ocean. They nest and roost on islands. Frigatebirds have long beaks with hooked tips, like their cormorant and pelican cousins, which helps them nab fish or squid from the surface. They also eat small turtles, jellyfish, and the chicks of other birds. As Columbus noted, frigatebirds occasio nally force smaller seab irds, li ke boobies, to cough up the fi sh they&#39;ve just caught, then swoop down and catch the loot out of the air. This is why they&#39;ve been named after types of naval ships: the man-o&#39; -war and the frigate . Their deeply-fo rked tails and the shape of their wings help them turn sharply and accelerate in the air. As Columbus said, they rarely land on the surface. In fact, they can&#39;t swim or even walk! Several of our most famous American authors have waxed poetic about the frigatebird. In 1876 Walt W hitman wrote a poem &quot;To the Man-of-War-Bird.&quot; H e describes seeing this animal from a deck of a ship :

fri gatebirds from a ship in the South Pacific:

As we drew nea re r the la nd, I ha iled with de lig ht the a ppea ra nce of innume ra ble sea-fowl. S creaming a nd whirling in s pira l tracks , the!:J wo uld accompa n!:J the vessel, a nd at times a lig ht on our !:la rds a nd sta!:JS. That pirat ical-looking fe llow, a pp ro pria tel!:J na med t he ma n-of-wa r&#39;s - hawk, with his blood-red bill a nd raven plumage, wo uld co me sweeping round us in g radua ll!:J diminis hing circles, till !:JOU could dist inct!!:! mark the stra nge ~ ashings of his e!:Je; a nd the n, as if satis-fied with his o bservat ion, wo uld sa il up into the a ir a nd disa ppea r from the view.