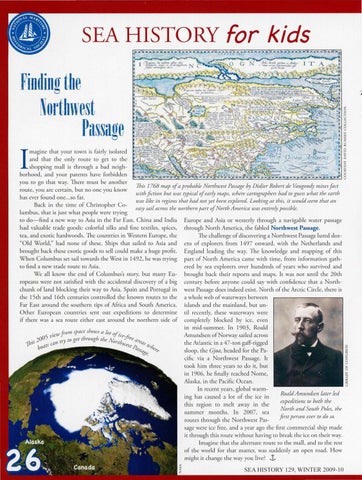 Finding the Northlvest Passage magine that your town is fai rly isolated and that the only route to get to the shopping mall is through a bad neighborhood, and yo ur parents have forbidden you to go that way. There must be another 7his 1768 map ofa probable Northwest Passage by Didier Robert de Vaugondy mixes fact route, you are certain, but no one yo u know with fiction but was typical of early maps, where cartographers had to guess what the earth has ever found one .. .so far. was like in regions that had not yet been explored. Looking at this, it would seem that an Back in the time of Christoph er Coeasy sail across the northern part ofNorth America was entirely possible. lumbus, that is just what people were trying to do-find a new way to Asia in the Far East. China and India Europe and Asia or westerly through a navigable water passage had valuable trade goods: colorfu l silks and fin e textiles, spices, through North America, the fabled Northwest Passage. tea, and exo tic hardwoods. The countri es in Western Europe, the The challenge of discovering a Northwest Passage lured doz&quot;Old World,&quot; had none of these. Ships rhar sailed to Asia and ens of explorers from 1497 onward, with th e Netherlands and brought back these exotic goods to sell could make a huge profit. England leading the way. The knowledge and mapping of this When Columbus set sail towards rhe West in 1492, he was trying part of North America came with time, from information gathto find a new trade route to Asia. ered by sea explorers over hundreds of years who survived and We all know the end of Columbus&#39;s story, but many Eu- brought back their reporrs and maps. It was not until the 20th ropeans were nor satisfied with rhe accidental discovery of a big century before anyo ne could say with confidence that a Northchunk of land blocking their way to Asia. Spain and Portugal in west Passage does indeed exist. North of the Arctic Circle, there is the 15th and 16th centuries controlled the known routes to rhe a whole web of waterways between Far East aro und rhe southern rips of Africa and South America. islands and the mainland, but unOther European countries sent our expeditions to determine til recently, these waterways were if there was a sea route either east around the northern side of completel y blocked by ice, even in mid-summer. In 1903, Roald Amundsen of Norway sailed across the Atlantic in a 47-ton gaff-rigged sloop, the Gjoa, headed for rhe Pacific via a Northwest Passage. Ir took him three years to do it, bur in 1906, he finally reached Nome, Alaska, in the Pacific Ocean. In recent years, global warmRoald Amundsen later led ing has caused a lot of the ice in expeditions to both the this region to melt away in the North and South Poles, the summer months. In 2007, sea first person ever to do so. routes through the Northwest Passage were ice free, and a year ago rhe first commercial ship made it through this route without having to break the ice on their way. Im agine rhar the alternate route to the mall, and to the rest of the world for that matter, was suddenly an open road. How might it change the way you live? J,