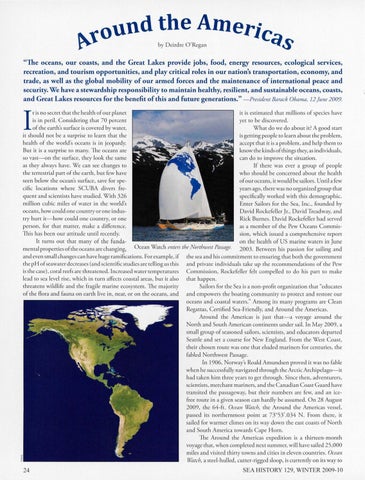 &quot;The oceans, our coasts, and the Great Lakes provide jobs, food, energy resources, ecological services, recreation, and tourism opportunities, and play critical roles in our nation&#39;s transportation, economy, and trade, as well as the global mobility of our armed forces and the maintenance of international peace and security. We have a stewardship responsibility to maintain healthy, resilient, and sustainable oceans, coasts, and Great Lakes resources for the benefit of this and future generations.&quot; -President Barack Obama, 12june 2009. t is no secret that the health of our planet it is estimated that millions of species have is in peril. Considering that 70 percent yet to be discovered. of the earth&#39;s surface is covered by water, What do we do abo ut it? A good sta rt it shou ld not be a surprise to learn that the is getting peo ple to learn about the problem, health of the world&#39;s oceans is in jeo pardy. accept that it is a problem, and help them to But it is a surprise to many. 1he oceans are know the kinds ofrhings they, as individuals, so vast-on the surface, th ey look th e same can do to improve the situation. as they always have. We can see changes to If there was ever a group of people the terrestrial part of the earth , but few have who should be concerned about the health seen below the ocean&#39;s surface, save for speofouroceans, it would be sailors. Until a few cific locations where SCUBA dive rs freyea rs ago, there was no organized gro up that quenr and scienrists have studi ed. With 326 specifically wo rked with this demographic. million cubic miles of water in rhe wo rld&#39;s Enrer Sailo rs for rh e Sea, Inc. , founded by oceans, how could one country or one indusD avid Rockefeller] r. , David Treadway, and try hurt it-how could one country, or one Rick Burn es. David Rockefeller had served person, for that matter, make a difference. as a member of the Pew Oceans CommisThis has been our attitude un til recently. sion, which iss ued a comprehensive report Ir turns out that many of the fundaon th e health of US marine waters in June mental properties of the oceans are changing, Ocean Watch enters the Northwest Passage. 2003. Between his passion for sailing and and even small changes ca n have huge ramifications. For example, if th e sea and his commitmenr to ensuring that both the government rhe pH ofseawater decreases (and scientific studies are telling us this and private individuals rake up rhe recommendations of rhe Pew is the case), coral reefs are threatened. In creased water temperatures Commission, Rockefell er felt co mpelled to do his part to make lead to sea level rise, which in turn affects coastal areas, but it also that happen. threatens wildlife and the fragile marine ecosys tem . The majority Sailors for the Sea is a non -profit organization that &quot;educates of the flora and fauna on ea rth li ve in, near, or on the oceans, and and empowers the boating co mmunity to protect and restore our oceans and coastal waters.&quot; Among its many programs are C lean Regattas, Certified Sea-Friendly, and Around rhe Americas. Around rhe Americas is just that-a voyage aro und the North and South American co ntinenrs under sail. In M ay 2009, a small gro up of seaso ned sailors, scientists, and educato rs departed Seattle and set a course for New England. From rh e West Coas t, their chosen ro ute was one rhar eluded mariners for centuries, the fabled Northwest Passage. In 1906, Norway&#39;s Roald Amundsen proved it was no fab le when he successfully navigated through theArctic Archipelago-it had taken him three years to get through. Since then, adventurers, scientists, merchant mariners, and the Canadian Coast Guard have transited the passageway, but their numbers are few, and an icefree route in a given seaso n can hardl y be ass um ed. On 28 August 2009, the 64-fr. Ocean Watch, rhe Around rhe Americas vessel, passed its northernmost point at 73Â°53&#39;.034 N. From there, it sailed for warmer climes on irs way down the east coasts of North and South America towards Cape Horn . 1he Around the Americas expeditio n is a thirteen-month voyage that, wh en completed next summer, wi ll have sail ed 25,000 miles and visited thirty towns and cities in eleven countries. Ocean Watch, a steel-hulled, cutter-rigged sloop, is currently on its way to