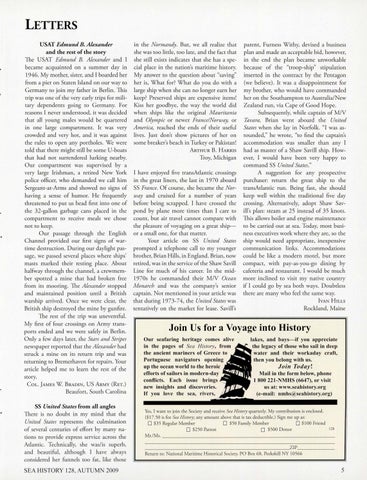 LETTERS USAT Edmund B. Alexander and the rest of the story The USAT Edmund B. Alexander and I became acquainted on a summer day in 1946. My mother, sister, and I boarded her fro m a pier on Staten Island on our way to Germany to join my fa ther in Berlin. This trip was one of the very early trips for military dependents going to Germany. For reasons I never understood, it was decided that all young males wo uld be quartered in one large compartment. Ir was very crowded and very hot, and it was against the rules to open any portholes. We were told that there might still be some U -boats that had not surrendered lurki ng nearby. Our compartment was supervised by a very large Irishman , a retired New York police officer, who demanded we call him Sergeant-at-Arms and showed no signs of having a sense of humo r. H e frequently threatened to put us head first into o ne of the 32-gallo n garbage cans placed in the compartment to receive meals we chose not to keep. Our passage th ro ugh the English C hannel provided our first signs of wartime destruction. During our daylight passage, we passed several places where ships&#39; masts marked their resting place. About halfway through the channel, a crewmem ber spo tted a mine that had broken free from its m ooring. The Alexander stopped and m aintained position until a British warship arrived . O nce we were clear, the British ship destroyed the mine by gunfire. The rest of the trip was uneventful. My first of fo ur crossings on Army transports ended and we were safely in Berlin. O nly a few days later, rhe Stars and Stripes newspaper reported that the Alexander had struck a mine on its return trip and was returning to Brem erhaven fo r repairs. Yo ur article helped me to learn the rest of the sto ry. COL. ] AMES w BRADIN, ARMY (RET.) Beaufo rt, South Carolina

SS United States from all angles There is no doubt in my mind that the United States re presents the culmination of several centuries of effo rt by many nations to provide express service across the Atlantic. Technically, she was/is superb, and beautiful, altho ugh I have always considered her funnels too fa t, like those

in the No rmandy. But, we all realize that she was too little, too late, and the fact that she still exists indicates that she has a special place in the nation&#39;s maritime history. My answer to the question about &quot;saving&quot; her is, W hat for? What do yo u do with a large ship when she can no longer earn her keep? Preserved ships are expensive item s! Kiss her goodbye, the way the wo rld did when ships like the original M auritania and Olymp ic or newer France/No rway, or A merica, reached the ends of their useful lives. Just don&#39;t show pictures of her on som e breaker&#39;s beach in Turkey or Pakis tan! ARTHU R

Troy, M ichigan I have enj oyed five rransAtlantic crossings in the great liners, the last in 1970 aboard SS France. O f course, she becam e the Norway and cruised fo r a number of years before being scrapped . I have crossed the pond by plane mo re times than I care to co unt, but air travel canno t compare with the pleasure of voyaging on a great shipor a small one, fo r that m atter. Yo ur article on SS United States prompted a telephone call to my yo unger brother, Brian Hills, in England. Brian , now retired, was in the service of the Shaw Savill Line fo r much of his career. In the midl 970s he commanded their M /V Ocean Monarch and was the company&#39;s senior captain . No r m entioned in yo ur article was that during 1973-7 4 , the United States was tentatively on the marker fo r lease. Savill&#39;s

parent, Furness W ithy, devised a business plan and made an acceptable bid, however, in the end the plan becam e unworkable because of the &quot;troop-ship&quot; stipulation inserted in the contract by the Pentagon (we believe). Ir was a disappointment for my brother, who wo uld h ave commanded her on the Southampton to Australia/New Zealand run, via Cape of Good H ope. Subsequently, while captain of M /V Tavara, Brian went aboard the United States when she lay in Norfolk. &quot;I was asto unded,&quot; he wrote, &quot;to find the captain&#39;s acco mmodation was smaller than any I had as m as ter of a Shaw Savill ship. However, I wo uld have been very happy to command SS United States.&quot; A suggestion for any prospective purchaser: return the great ship to the transAtlantic run. Being fast, she should keep well within the traditional five day crossing. Alternatively, adopt Sh aw Savill&#39;s plan : steam at 25 instead of 35 knots. This allows boiler and engine m aintenance to be carried out at sea. Today, most business executives wo rk where they are, so the ship would need appropriate, inexpensive communication links. Accommodations could be like a modern motel, bur more compact, with pay-as-you-go dining by cafeteria and restaurant. I wo uld be much more inclined to visit my native country if I could go by sea both ways. D o ubtless there are m any who feel the sam e way. I VAN HILLS

Join Us for a Voyage into History Our seafaring heritage comes alive in the pages of Sea History, from the ancient mariners of Greece to Portuguese navigators opening up the ocean world to the heroic efforts of sailors in modern-day conflicts. Each issue brings new insights and discoveries. If you love the sea, rivers,

lakes, and bays-if you appreciate the legacy of those who sail in deep water and their workaday craft, then you belong with us.